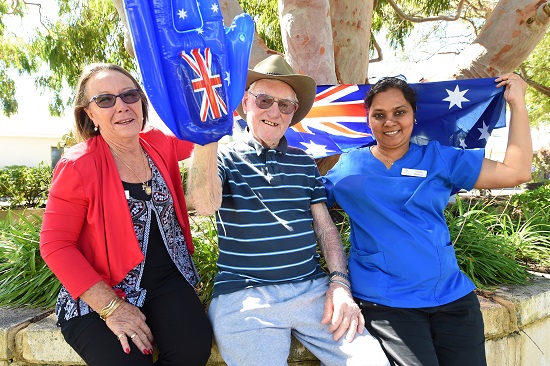 Dozens of residents at Mercy Place Mandurah will celebrate their love and loyalty to the country they have called home for, in some cases, more than seven decades, when they take part in the celebrations organised as part of Australia Day at the not-for-profit home.

And amongst them will be 88-year-old Bill Adair, who originally hails from Londonderry in Northern Ireland, and who has called Australia home since he was 25 years old.

Mr Adai says living the majority of his life in Australia has been a privilege.

“It’s really wonderful to be an Australian citizen,” says Mr Adair, who spent more than six years in the British Army, and who has travelled all over the world including Tripoli, Germany and Egypt.

“What struck me most when I first arrived here was the attitude of Australian people, they are so friendly and I think the way they embrace life is just wonderful.”

After meeting his Australian wife, the couple went on to have four children - three boys and a girl - and Mr Adair is particularly proud that his sons have all gone on to join the Australian Navy.

Mercy Place Mandurah Service Manager, Christina Venables, who was born in Zimbabwe, says Mercy Health had a rich cultural diversity amongst its team in Mandurah, with many individual staff members as well as residents having moved to Australia from overseas.

“I think we’re all very excited about celebrating Australia Day,” she says. “The Mercy Health team, as well as our residents, are hugely proud to be Australian, and at the same time we are very respectful of other people’s culture and heritage.

“We’ll be spending the day having a traditional Aussie barbecue as that offers a great opportunity for all of our residents to celebrate living in Australia."