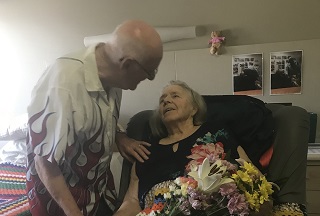 After more than 65 years of marriage, the love lives on for Mercy Place Westcourt resident Win Morris and her husband Ken, who are set to spend their 67th Valentine’s Day side-by-side, after meeting by chance at a beach on the south coast of England in the early 1950s.

Indeed, that serendipitous meeting changed both of their lives, as they went on to get married at Horsham Registry Office near London on 31 July 1954, after Win, who was born in Wales, met her husband-to-be at Paddington Station that morning. He had only just been demobbed from his two years of national service, where he was based in Pembrokeshire with the Royal Electrical Mechanical Engineers.

The couple went on to live in various places near Crawley, just outside London, before Ken was offered a job in Barnstaple in Devon as a gear cutter and turner and the couple relocated to the English south coast with their two young sons.

Fast forward another two decades and the couple made the decision to immigrate to Australia after visiting their son and his wife, who had recently moved to Melbourne, and by their own admission ‘falling in love’ with the country.

“We just fell in love with the life, the weather, the surroundings and the people,” recalls Ken, who moved over to Victoria with his wife in 1992, before moving to Cairns the following year in 1993, after his son was offered a job in Queensland.

“We’ve been here ever since and we just love it. The Australian people are lovely and we have made many friends. Yes, we miss our families, but we have never looked back and have loved making our life here,” adds Ken who lives in Coconut Resort.

And although Win, who has advanced Alzheimer’s, has lived at Mercy Place Westcourt for the past two years, Ken continues to visit her every day, where they still enjoy watching movies, sharing morning tea and spending time outdoors in the not-for-profit home’s gardens.

“Like other couples, we’ve had our ups and downs during our marriage, but we have worked at them and overcome them and Win is absolutely the love of my life,” says Ken, who renewed his wedding vows on his and Win’s 50th wedding anniversary.

“I’ve been asked if I have any tips for a long and happy marriage, and all I can say is that it’s about patience, tolerance, give-and-take and love and respect.”

Mercy Health Westcourt Service Manager, Angela Cox, says Win and Ken have had, and continue to have, a wonderful partnership.

“Win and Ken are well-known at Mercy Place Westcourt because Ken visits every day, and he is clearly an incredibly loving and devoted husband,” she says.

“We are very keen to make this Valentine’s Day extra special for them as they are the most lovely couple, and it is clear that they still think the world of each other.”