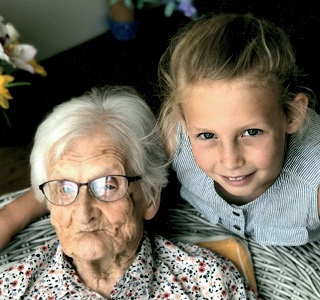 Mercy Place Mont Clare resident Grace Alexander celebrated her 100th birthday last weekend, surrounded by her family who say the centenarian’s life has been hallmarked by a quiet sense of determination and compassion.

And in a century that’s witnessed two World Wars, the landing of the man on the moon, and a myriad of world-shaping events, Mrs Alexander has, by anyone’s standards, lived a full life which has seen her live in a number of countries, including both the northern and southern hemispheres.

Mrs Alexander was born in Dunfermline, the old capital of Scotland.  She was the middle of three sisters, all of whom went on to qualify as teachers after being spurred on by their father who was a great believer in education for girls - which was hardly a universal belief at the time. This instigated her own interest and passion for education throughout her life.

After meeting her husband-to-be, Hugh, during the Second World War, the couple married and moved to Nigeria, where Hugh worked as a civil engineer on the Bornu Railway Extension until 1961.  During this time the couple had their two daughters - Christine and Mary.

After returning to Britain for a few years, the family relocated to Perth in 1964 where Hugh began work on the Perth-Kalgoorlie section of the standard gauge railway.  The family settled in Nedlands where Grace worked as a kindergarten teacher at Hollywood and City Beach Kindergartens. 1974 saw Hugh's work take the family to Mt Newman where Grace once again worked with young children at Mt Newman kindergarten, before the family returned to the Western suburbs, where they bought a home in Cottesloe.

Daughter Christine Hebiton says her mum loved children throughout her life and retained her staunch passion for education.

“Mum never lost her zest for education instilled by her father.  As well as working as a teacher, in her later years she volunteered for the Dyslexia-SPELD Foundation of WA, which offers West Australians of all ages support with literacy and at Meerilinga Young Children's Foundation, which had a resource library for early childhood educators.

“Everyone at Mercy Place Mont Clare likes and respects Grace very much and we’re all delighted that she has reached this major milestone, we are made a big fuss of her last Sunday.”