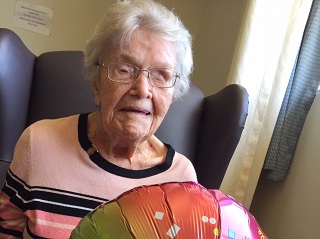 It’s fair to say that Mercy Place Woree resident Eileen Tayler is an old hand at birthdays, given she’s about to celebrate her 106th milestone.

The centenarian will celebrate her momentous birthday on Friday August 21, accompanied - at an appropriate social distance - by family and friends who say she still has a great sense of humour and a wonderful heart.

And in a century that’s seen two World Wars, the landing of man on the moon, and a myriad world-shaping events, Mrs Tayler puts her longevity down to hard work and good, old fashioned, plain food.

Mrs Tayler is a born and bred Queenslander, having entered the world in the small but historic gold mining town of Georgetown in the Shire of Etheridge. She was the first daughter born to her parents, Patrick and Melvina Tierney, and was the third child of eight - four boys and four girls.

Having moved to Danbulla with her family, Eileen grew up on the family farm during Australia’s Great Depression, where she recalls being fortunate to have plenty of milk, cream, eggs and butter, which she has continued to enjoy throughout her life.

Eileen did not begin school until she was 11-years-old because until 1925 there wasn’t a teacher at Danbulla’s Lake Euromo school. Despite attending school for only four years, she became a talented seamstress and was known for the making of her beautiful clothes, and especially her stunning wedding gowns.

In fact, she made her own wedding dress after meeting her husband-to-be, Andy, at a dance in Danbulla, marrying him a couple of years later in Atherton on 3 July 1941.

Eileen’s daughter, Kathryn McDonnell, says she still finds it hard to believe that her parents met at a dance, given her father was renowned for having “two left feet.”

“He showed no interest in dancing whatsoever, so I guess he must have been smitten with mum,” laughs Kathryn. “I do know that he used to ride his pushbike regularly from Tolga to Danbulla to court her. That was a decent ride as then, of course, there were no mountain or geared bikes. But obviously, his persistence most definitely paid off.”

Despite Andy going off to war, the couple became parents to three children during the 1940s, and happily Andy returned to his family once WWII ended. Finding it very hard to settle after his experience in the army, Andy relocated his family several times, first to Herberton, then to Mt Molloy and on to Kennedy, before they finally settled in Cairns, in March, 1950.

“Everyone at Mercy Place Woree likes and respects Eileen very much and we’re all delighted that she has reached this major milestone. 106 is a huge achievement and we’ll be making a big fuss of her on her birthday.”