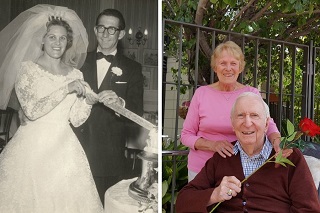 After more than 60 years of marriage, the love lives on for Mercy Place Mont Clare’s resident Don Watts and his wife Michelle, who are set to spend Valentine’s Day 2021 once again side-by-side for the 61st time, after falling in love and having a whirlwind wedding in London in the late 1950s.

The pair – who are born and bred West Australians – have known each other since they were children, regularly bumping into each other as they played in tennis tournaments around Perth, but it was only when they met by chance at a farewell party for a friend in a pub in London that they just ‘clicked’, and were married only a few weeks later.

“Although we’ve known each other since we were young children, and in fact our parents had holidays in Toodyay at the same time, we didn’t get together as a couple until we were in our early 20s and both living in the UK,” explains Michelle.

“I was actually due to leave London for Europe soon after the party, and Don had arranged to drive around the continent with friends. And after that my parents had arranged to come over from West Australia to bring me home after we’d been on holiday around England, Scotland and Wales.  So our plans had to change very quickly and I had to leave Don to organise the wedding while I went away with my parents for a few more weeks.

“Although things happened quickly, we’ve had a very happy marriage, helped enormously by having a united view on family life and also having our own independent interests, which we’ve always both thought to be very important.”

After marrying and spending 18 months in London, the couple returned to Perth where Don took up a position as a lecturer at the University of WA, soon becoming an Associate Professor, before being appointed as the Director of the WA Institute of Technology in 1980, now Curtin University.

The couple lived in Floreat Park before moving to Dalkeith and then buying a house in Shenton Park.  Due to Don’s career, they also lived elsewhere in Australia, including the Gold Coast and Darwin, and also internationally, in America and Canada.

And so, on the eve of Valentine’s Day, what are Michelle and Don’s tips for a happy and successful partnership?

“I think we have always been supportive of each other and have also maintained a sense of humour too,” says Michelle.

“We both come from happy families and were very focused on creating a similarly happy family for our children.  Plus I think we’ve been lucky enough to have stayed in love.  Marriage is certainly not always plain sailing, but we’ve tried to weather the storms together.”

Mercy Place Mont Clare Service Manager, Surabh Nair, says Michelle and Don have had, and continue to have, a wonderful partnership.

“They are well-known in our Mercy Place community and are clearly still devoted to each other, despite the fact that Don lives with us now at Mercy Place Mont Clare,” he says.

“We are very keen to make this Valentine’s Day extra special for them as they are the loveliest couple, and they obviously still think the world of each other.”