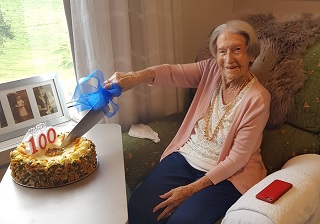 On her 100th birthday there is only one thing that Jean Dyet regrets: she is yet to sky dive.

The adventurer and great-great grandmother from the Gold Coast become a centenarian on 4 October. Born in Newcastle in 1921, Jean has had some big celebrations for previous milestone birthdays.

For her 70th birthday her family bought her an around the world airplane ticket. She spent six months travelling to Europe, Great Britain, USA and New Zealand. Having caught the travel bug, Jean went backpacking in Australia, did bus tours and drove across the Nullarbor Plain.

Now living at the Carinity Cedarbrook aged care community at Mudgeeraba, Jean still keeps active. An exponent of Tai Chi until the age of 94, she now does 20 minutes of Yoga each morning then bounces a handball to keep her coordination sharp.

Jean was the ninth of 10 children born to Joseph and Eliza Hogbin. As a child she loved playing vigoro, hopscotch, cricket, dominos, skittles and card games. In her teenage years Jean enjoyed bike riding, swimming in Glenrock Lagoon, and dancing with friends on Saturday evenings.

Jean had to rise at 4am each morning to milk the family cow and collect chickens’ eggs. She walked 2km to and from school barefoot, putting her shoes on when arriving at school.

Times were very hard for her family so Jean left school at 13 and went to work at a 16-room residence in Hornsby, sending her wages back to her family. For her next job, Jean would ride her bike 20km each way as it was her only mode of transport to get to and from work.

Jean was later the manager of fruit shops in Newcastle where she met her future husband, Cyril ‘Eric' Dyet, a Merchant Seaman. The couple married in 1943 and had two children, Robyn and Edward. They worked together in Eric’s butcher shop.

After her husband passed away, Jean worked in function rooms hosting weddings and other celebrations and became a keen fundraiser for Sydney-based charity, the Australian Ladies Variety Association.

Later in life she enjoyed also playing golf – once hitting a hole-in-one – and took up Tai Chi and Yoga.

She says people should enjoy lots of laughter, have fun with adults and children, help people in their time of need, and love life.