Congratulations to Resthaven's Richard Hearn AM 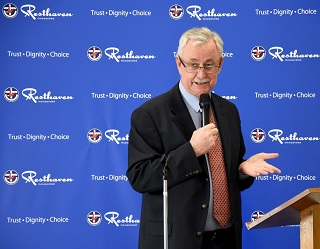 Resthaven's former Chief Executive Officer, Richard Hearn, was awarded a Member of the Order of Australia (AM) in the General Division in the Queen's Birthday 2022 Honours List, announced on 13 June by the Governor-General, David Hurley AC DCS.

The Australian Honours and Awards system recognises the outstanding service and contributions of Australians, and with 26 years as Chief Executive Officer at Resthaven, Richard was recognised for significant service to aged care, and to the community.

Darren Birbeck, who commenced as Chief Executive Officer on Richard’s retirement, says, "On behalf of the Resthaven Board, our staff, volunteers, and the 14,000 people supported by Resthaven, I congratulate Richard on becoming a Member of the Order of Australia."

"Richard has been an inspirational leader, who demonstrated unwavering advocacy and support for older people in our community. He is an incredibly worthy recipient of this honour."

Richard commenced as Regional Director at Resthaven in 1986, and was appointed Resthaven CEO in 1994.

Over the years, the organisation has grown in service type and in geographical location, diversified into home care, community and restorative services and quadrupled the number of employees, whilst continuing to focus on improving the quality of Resthaven’s services.

On retiring, Richard said, "I’ve been fortunate to have been a part of the growth of the organisation, working with incredibly talented and dedicated people who remain committed to those in our care day to day. It is a privilege to support the people who invite Resthaven to care for them."

"There are people in our community who get to a stage where they are not as independent. At that time, to maintain quality of life, they will depend on services. It is important their needs are met. I see this as an important and worthy area to be working in – providing outstanding care and support to older people and their carers."

Richard’s continued advocacy for the aged care sector included many years of involvement at all levels of the Aged and Community Care Australia peak body, and he chaired the UnitingCare Aged Care Network from April 2017 – 2019.

Since retiring as Resthaven CEO, Richard continues to serve on a number of aged care-related boards and advisory committees.