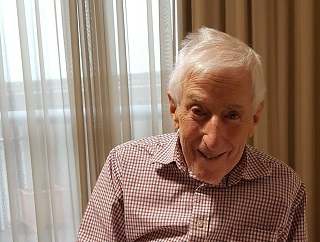 Old connections have been serendipitously revived in the western suburbs after not-for-profit aged care home Mercy Place Mont Clare launched a pen pal initiative, aimed at expanding residents’ social networks and choice of activities during the time of COVID-19 restrictions.

And as a result of seeing the article in the local paper, Cottesloe resident Margaret Wilkes decided to take part in the program, and just happened to be assigned Mercy Place Mont Clare resident and long-time Nedlands local Ross Nicholson as her pen pal.

And during their first correspondence the pair realised they knew each other, having both worked together as student counsellors at TAFE in the mid-90s.

“It was great to hear from Margaret and for her to enquire as to whether I was the ‘ex TAFE Counsellor Ross Nicholson’ who she and her husband had known years ago,” says Ross, who grew up in Nedlands and attended the local primary school, before going to John Curtin College of the Arts and then studying psychology at the University of Western Australia.

“I was able to write back and tell her my news, including that a group of us from TAFE continue to regularly meet up for lunch.

“I also mentioned that I’m currently compiling my memoirs about growing up in Nedlands through the 1940s and 50s, as well as my love of jazz music, which was instilled at a young age when I was taken down to North Cottesloe Beach by my parents on Sunday mornings, where jazz was played in the open air over the beach broadcasting system.”

Mercy Place Mont Clare Service Manager, Joan Lowney, says the response to the pen pal program had been prolific, with dozens of locals getting in touch wanting to write to Mont Clare residents.

“We are so pleased to have been able to reconnect Ross with an old acquaintance as a result of this initiative, and we know he has derived much pleasure from corresponding with Margaret and catching up on what has occurred in their lives over recent years,” says Ms Lowney.

“We’re fortunate at Mont Clare that many of our residents have formed strong friendships and, as a result, we have a close-knit community where friendships can flourish, but the success of our new pen pal program has brought an extra dimension to our residents lives, and one that they are enjoying immensely."