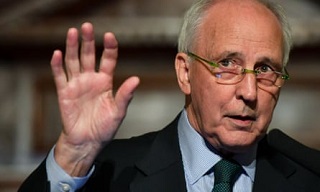 Keating’s suggestion is a post-funding model, similar to HECS, where the Government would advance a loan to every Australian needing care, whether that be care in their own home or in a residential aged care facility.

“Higher education charge is a post-paid system. These are loans advanced to students on… mostly an income-contingent basis. So if a student goes to university then leaves and then has gainful employment the tax system puts a garnishee on the wages and pays the university debt down. If in fact a person never had any employment thereafter the loan would never be repaid.

“So if we were to move and think of aged care as a post-paid system, the Commonwealth could then advance as loans to every aged Australian so much as to meet their needs in support services to stay at home or alternately in care accommodation.”

Under this model, every Australian would have an account that the Government would deposit money into to pay for aged care services.

After a person passes away, their estate would be responsible for paying the balance owed. In circumstances where there are no assets to help pay for the money owing, the Government would foot the bill.

“It’s a very nice way of working out what the Commonwealth should really pay vis-à-vis the residual assets of an aged person, be it superannuation or their bricks and mortar assets, etc.”

During yesterday’s hearing, Aged Care Royal Commissioner Tony Pagone was concerned about people reducing their assets, increasing the chances of never having to pay the loan back.

Keating said that a lot of work would be needed to address such issues, but that he was optimistic about Australia being able to get such a system up and running.