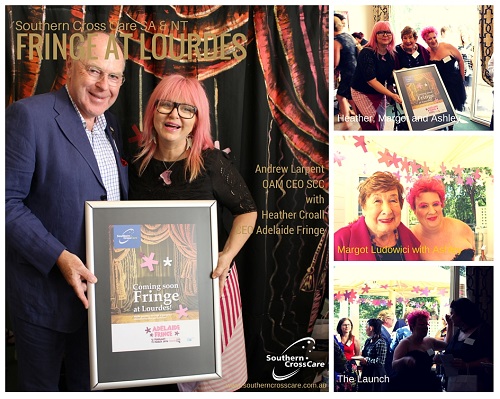 The Adelaide Fringe is coming to the Lourdes Valley precinct at Myrtle Bank and its surrounding Southern Cross Care SA & NT communities, to present a program of international and local shows and activities, in what is considered a first of its kind at this scale, for South Australia, within an aged care home.

The idea was initially suggested and is being supported by Margot Ludowici, whi is living within the Southern Cross Care precinct.

The end result is a program of shows and events for Southern Cross Care Lourdes Valley, The Lodge, The Waterford, The Heritage Apartments, Coach House Mews, Glen Woodley and Myrtle Cottage, to be called Fringe at Lourdes.

"The opportunity to bring the Fringe directly to our community at Lourdes is encouraging older people to stay connected to the arts and to embrace all that the Southern Cross Care and The Adelaide Fringe stand for. It allows us to showcase our philosophies of staying connected with the broader community.

"Life does not stop simply because you have changed your address.”

The Adelaide Fringe Festival Director and CEO Heather Croall, together with Creative Producer Julianne Pearce, have ambitious plans for the 2016 Fringe at Lourdes program which will take place from the 12th February until the 14th March 2016 and include international as well as local artists in an exciting program for local residents.

Margot is famous for saying, “Art is a product of one's imagination.”

Margot’s love for the arts started back in 1973 when she was a member of The Adelaide Theatre Guild and it was around 1991 when she became heavily involved with The Independent Arts Foundation. Her passion for the arts has never stopped.

Chair, IAF and Founding Chair of Adelaide Fringe, Frank Ford AM, said “Congratulations to Margot for her contribution to this wonderful venture and the others who are making all this happen. As Founding Chair of the Fringe I am delighted the way the Fringe has grown and the way it serves artists and the total community. My very best wishes for this exciting initiative.”

The 2016 Fringe at Lourdes program include Fringe international artists, such as;

The Fringe at Lourdes program also includes an open air market style day, called Art Space, providing an opportunity for friends and family to come together to join in one of the many art or creative classes on offer and learn a new craft. On this day, people will be entertained by the likes of Josh Croall Juggler and Madam Bonbon and be visited by The Art Bus.

The Adelaide Fringe is the largest arts festival in the Southern Hemisphere. Its own impact on the social and economic fabric of South Australia is undeniable and it continues to grow, year after year.