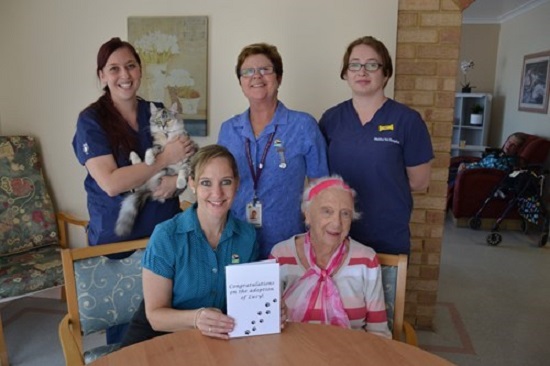 Hall & Prior Rockingham Aged Care Home staff have thanked Malibu Veterinary Hospital after they came on board to help care for the home’s new rescue cat. Both the home’s residents and staff were delighted when Lucy the cat came to the home late last year.

Director of Nursing Terri Woolhouse said the Malibu Vet Hospital had agreed to sponsor Lucy and provide her with general check-ups and worming.

“About December last year there were residents and members of staff asking if we could have a cat for the home,” she said. “We have a dog that visits regularly but we knew it would be great to have a pet here full time.”

Terri’s search took her to Gumtree, where Lucy was being cared for by a lady who had taken her in off the streets but was unable to keep her.

“Lucy has settled in so well, she loves the residents and often sits on their beds or in my in-tray,” she said.

“One of our Personal Carer Advanced Practice staff members Karen Mitchell then contacted Malibu Vet recently and they said they’d sponsor Lucy. We’re so grateful to have their support.”

Studies say having pets in aged care homes is beneficial for the residents, many of whom may have had pets when they were younger or before they moved to the home.

Rockingham resident Annie Barnwell said she loves having Lucy around.

"She's such a lovely cat and you see everyone's faces light up when she's around," Annie said.

Terri said other residents had said having a pet makes the home feel like more of a community, as staff and residents all pitch in to care for her.

“Lucy’s part of the home now," Terri said. "The residents are always letting me know what she’s been up to or where she is sleeping.”

Click here to find out more about Hall & Prior Aged Care's services.