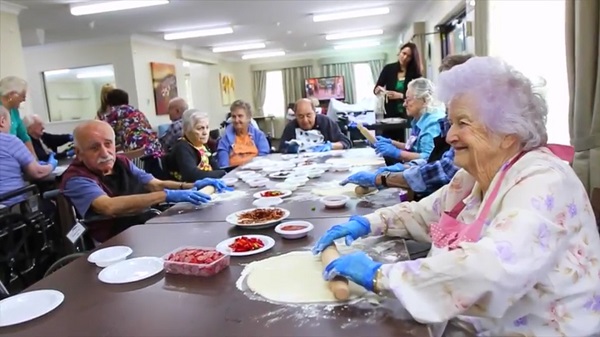 Making pizza may be a simple process for many people, but for the residents of leading NSW aged care provider, SummitCare, it is a meaningful activity that is fostering connections and enhancing their wellbeing.

SummitCare created a short video at its Smithfield centre to demonstrate why the activity of gathering residents and their families together to make pizza is so popular and beneficial.

The activity shows residents, family members and SummitCare team members rolling out pizza dough, decorating it with delicious toppings and cooking up a feast – all while having a relaxed and happy time together.

In the video, Carla Beheram, SummitCare Manager – Special Projects, said joining any of the many activities on offer was a personal choice for residents, but pizza making always attracted a group of participants.

“There are many benefits with an activity like pizza making,” she said.

“Obviously, the residents get to smell and taste the food that they prepared. From a physical perspective, residents can improve their manual dexterity – they can roll the dough, they can knead the dough, placing toppings on the pizza.

“From a social perspective, residents get to socialise with other residents and also we encourage as much as we can families to come and participate in the activity because that again helps the residents to connect with their community prior to coming to SummitCare.”

Stars of the film include Gwennyth Jolliff, a 94-year-old resident who is fond of ham and pineapple pizza and looking forward to cooking with her good friend Alan; and Antoinetta, the wife of a resident who came to Australia from Italy as a girl, and has fond recollections of making pizza at her childhood home, memories she was able to share during the activity.

“It is one of the pillars of our wellbeing approach, which focuses on delivering optimal physical, emotional, social and spiritual wellbeing to all our residents and their families,” she said.

“Pizza making becomes a meaningful activity when it allows people to connect with others, use their senses and perhaps even remember lovely family gatherings.”

SummitCare will continue to film more of its activities to use as a staff training tool, a snapshot for new families and for general viewing.