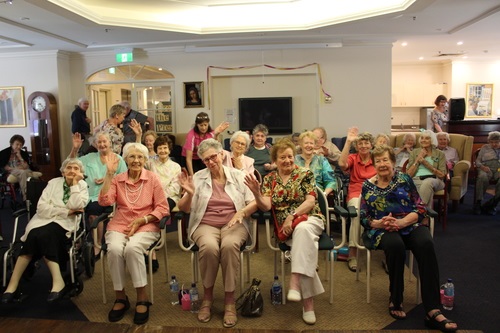 The Deco Dolls took audiences at The Lodge in Lourdes Valley back to the 1920's and 1930's with flapper, charleston dances, feathers, frills and thrills, as part of the 2017 #SCCFringe program.

The performance by the Deco Dolls was a sell-out show - and it's no wonder with the promo suggesting they will entice you into their scandalous and glamorous world of Burlesque, with fancy Charleston footwork, feather fan dances & dazzling characters. That they did.

The feedback from everyone who attended the show has been great.

Kath and June travelled from Oaklands Park Residential Care to Lourdes Valley on the bus, and Lifestyle Coordinator Lyn Melhuish says that they were waiting at the front door excited and ready to go early. Kath and June themselves said after the show, that they "loved the morning! The girls are very clever. The glamour of the costumes was great.”

Mae said the show was great and Joan enjoyed the glamour of the clothes, the charleston dancing and tap dancing. Others have already requested to attend more shows!

The 2017 #SCCFringe program is spread across three key Southern Cross Care sites with a program of international and local performances and activities which continues to be considered a first of its kind at this scale, for a South Australian aged care organisation.

This season Southern Cross Care engaged Julianne Pierce from Art Engineers as the #SCCFringe Producer, with many residents and customers are enjoying the selected shows.