The Simple Sausage Restoring Dignity to the Elderly 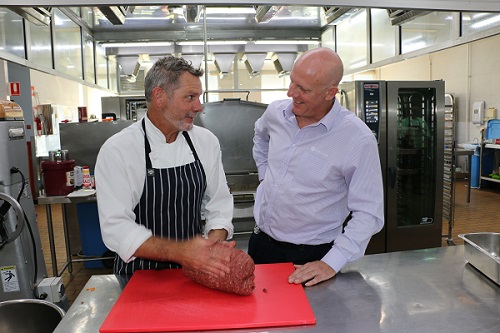 For most a sausage on the barbie is a simple pleasure we take for granted but for those with swallowing difficulties it is a delight that until now has been denied. Fortunately, the team at Lyndoch Living Warrnambool has made it their mission to bring the sausage back onto the table for their residents, and with the help of the CSIRO, the results are looking very promising.

Lyndoch Living hotel services manager Simon Corbett and his catering team are the main force behind the push to bring the sausage back. As a passionate advocate for maintaining the dignity of aged care residents, Mr Corbett said the development of the texture modified sausage is just one of the many ways in which his team is working to restore dignity to those in their care, as well as improve nutrition and wellness.

“Texture modified foods are not a new thing,” he said “but until now this kind of food has been unrecognizable, visually, as real food.

“For dementia patients especially, if the food you put in front of them doesn’t look like food, they won’t eat it. Quite understandably,” he added.

“Our team’s aim is to create a texture modified sausage that looks, feels and tastes like a real sausage, with that fantastic flavor hit you get on the outside. We’re getting very close to achieving that aim, but we’re not quite there yet.”

The challenge is finding a binding agent that is soft enough for residents to eat, but firm enough to maintain the sausage shape. At present Mr Corbett’s team are using egg whites, but they are hoping to find a better stabiliser. To that end they have teamed up with the CSIRO and local meat company Midfield Meats to improve the sausage and make it more widely available.

“Malnutrition is a common problem in aged care facilities, and the binding agent also affects the protein levels of the sausage,” Mr Corbett said.

“A sausage is the perfect food to add protein to, or vitamins if that’s what’s needed, whatever is required to boost the health of the residents.

“That’s where we’re really hoping the CSIRO will come into play with it.”
Mr Corbett said the sausage in its current form has already been a huge hit with the residents at Lyndoch Living.

“We put on a weekly barbecue for our high care dementia residents, but until recently many of them missed out because of difficulty swallowing. We had a guy that wouldn’t eat his meal because everyone else was eating a sausage and he wasn’t,” Mr Corbett said.

“The first time we offered him the sausage, he kept coming back for more.”
Mr Corbett said it’s not just the quality of the food that improves residents’ quality of life, but the overall experience of sharing a meal.

Rather than serving his meals on trays like a hospital does, Mr Corbett has ensured Lyndoch Living residents eat from custom made crockery which has been designed to reduce spills and encourages elders to eat independently. His team also serves up meals on demand, rather than delivering a whole batch at once, to ensure everyone receives their meal while it’s fresh and hot. As a result, many in their high care dementia unit have been maintaining and even putting on weight in some cases, a phenomenon almost unheard of in aged care dementia residents.

“Studies show that something like 75% of an aged care resident’s day is focused on food and the sharing of meals, that’s pretty significant, so we need to get the recipe and the setting right to really ensure our residents have the best experience we can offer,” Mr Corbett said.

Click here to find out more about Lyndoch Living.

Pictured: Simon Corbett discussing the sausage recipe with one of his chefs, Peter Medley