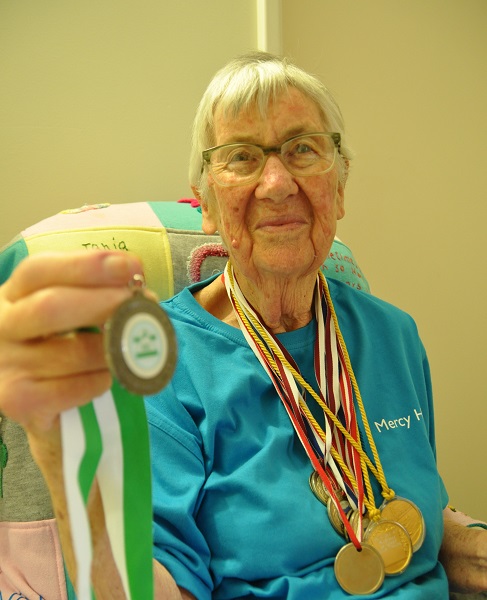 82-year-old Valryn Elshaw has been awarded more than a dozen sporting medals in her lifetime despite being a partial quadriplegic and sustaining brain damage from a major car accident back in 1984.

And the Mercy Place Edgewater resident’s competitive spirit remains alive and well following her latest win - a medal for her Mercy Health team at the 2017 Aged Care Games, organised by the Seniors Recreation Council of WA.

During the annual event, which is held across Western Australia, dozens of teams from aged care homes compete to gain the highest score for a chance of winning the perpetual trophy.

And during the competition, Mrs Elshaw was able to draw on her own experience of winning 13 gold medals, one silver and one bronze for her competitive swimming ability while trialling for the Paralympics at WA state level, which she competed in for more than seven years.

“I always loved swimming and was very proficient by the time I was five years old as I grew up in South Perth and in those days you could swim in the river without the pollution issues there are today,” she says.

“But when I was in my 40s I was in a serious car accident where I broke my neck in two places and completely smashed my rib cage, resulting in me becoming a partial quadriplegic and obviously that completely changed my life.

“Very fortunately however, I remained able to use my arms and legs a little bit in the water and swimming became part of my rehabilitation, so much so that as I got stronger, I was asked to trial for the state Paralympics.”

Mercy Place Edgewater Service Manager, Helen Fullarton, says Valryn and the Mercy Health team had embraced participating in the Aged Care Games, which gave residents the opportunity to experience being part of a sporting team again, whilst enjoying social interaction and an element of competition.

“These games give our residents a significant goal to be a little more active every day, and so as well as it being great fun, taking part in this event also contributes to them enjoying a healthier lifestyle,” she says.

The team competed earlier this month in events including skittles and sit down hockey, returning home with a participatory medal.

The event was first launched by the Seniors Recreation Council of WA in 2003, which established the Games to provide an opportunity for people in residential care to experience team participation and light competition through adapted games in a community recreation facility.