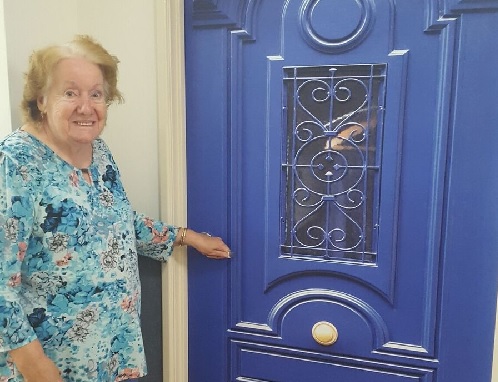 Bethanie, one of Western Australia’s leading not-for-profit aged care and retirement living providers, is constantly seeking ways in which to help their dementia residents and have come up with a unique concept to help trigger memories of the past for residents at their Bethanie Fields Aged Care Facility in Eaton.

The new endeavor is called ‘The Front Door’ project, and has seen 25 residents located in the dementia secure wing of the aged care facility receive a door motif on the front of their private room.

Bethanie Occupational Therapist Kristy Alexandratos says, “Residents and families each chose their own unique door design, opting for motifs that may be similar for example to a house they lived in whilst growing up.

“Where residents and families were unable to choose, we researched their favourite colours and traditional style doors from their home towns.”

All in an effort to make the area more dementia friendly, the idea for this project was initiated as part of Dementia Awareness month in 2017 and has been six months in the planning.

Kristy says, “Some inspiration came from the Alzheimer’s Australia website and in addition, one of the Bethanie team members had visited a loved one in the Netherlands where their facility had done something similar.”

Bethanie Fields resident Elizabeth Bowron (Liz) has always taken great pride in decorating and personalizing her room and states, “I think it’s fantastic. I chose my door because I love blue – blue like the open sky – it goes to wherever you want to go. I love it”.

Bethanie Fields resident Carole Barber adds, “It’s a welcome door – I chose it because it has windows and more detail on it and the wood was different – that’s a bit antique looking.”

Kristy says, “Dementia is a unique experience and everybody is different, so we are hoping that with this project we can connect even more personally to every one of our residents and assist to bring back some cherished memories.

“Not only will it assist with orientation but it will also replace the clinical atmosphere on our dementia specific wing to make it a more homely environment. The new doors have already generated much discussion and reminiscence between residents and staff. At Bethanie we believe there is a life to live, and living with dementia is a time to live.”