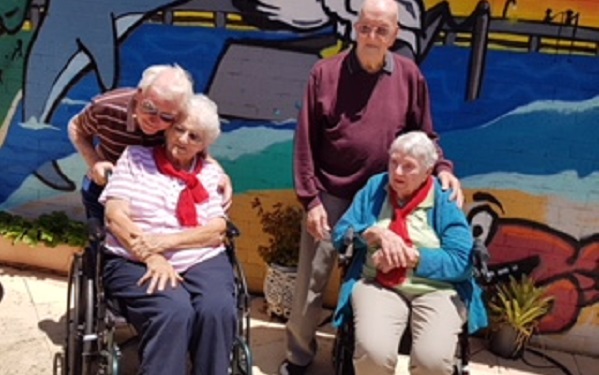 After more than 60 years of marriage, the love lives on for Mercy Place Mandurah residents Betty and Leslie Williams and also William and Faye Adairs.

The two couples will be jointly celebrating over a century of marriage on Valentine’s Day and readily admit their happy unions have both centred on always being honest and true to each other.

After marrying on 10 December 1955, William and Fay Adairs went on to have four children - three boys and a girl - and their family brood now includes many grandchildren.

The Williams, who lived in Waroona for most of their married lives, have a son and also a number of grandchildren.

“We’ve had a wonderful life together, in my opinion there’s three things you need for a good marriage, love, respect and compatibility,” says Mr Williams.

“We haven’t had many disagreements, but the ones we have had have been cleared up quickly and we’ve never gone to bed upset,” adds Mrs Adairs.

Mercy Health Mandurah Service Manager, Christina Venables, says couples like Betty and Leslie Williams and William and Faye Adairs epitomise what Valentine’s Day is all about; having true commitment and respect for each other, as well as love.

“Betty and Leslie and William and Faye’s partnerships are true testament to a long and happy marriage,” she said. “It will be wonderful to see them both celebrate Valentine’s Day; both couple certainly still love each other very much.”