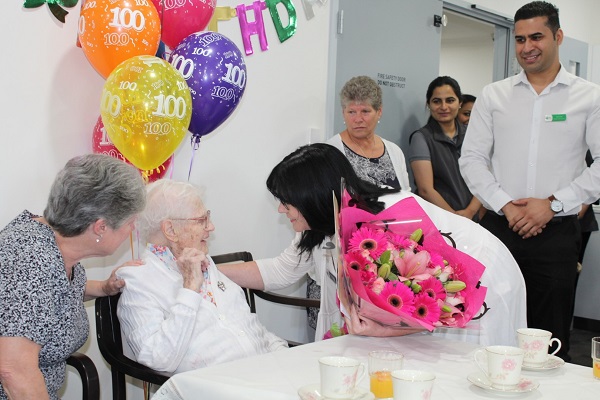 Margaret Boyd recently celebrated her 100th birthday surrounded by her family and friends at TLC Aged Care Homewood in Hallam. When seeing the large crowd gathered to celebrate her milestone, Margaret said, “If you do all this for the naughty girls I can only imagine what you do for the good girls!”

Margaret was born in St Kilda, Victoria at a time when St Kilda was an affluent suburb frequented by the rich and famous. She was born at the end of the First World War, a time when the flu pandemic wiped out more people than the war. She recalls her parents saying the doctors thought they were going to lose her, she was so little and feeble. 100 years later it is evident, they had that wrong.

Margaret’s father James was a notable Mariner in those days, piloting the vessel that was the precursor to the Spirit of Tasmania back and forth across Bass Strait. Margaret loved being by his side at every opportunity. “I can still picture the journey vividly in my mind, and I remember the little islands we used to pass along the way. It was frightening in rough seas but I always trusted my dad.”

Following a private school education in both Tasmania and Melbourne, Margaret settled into working at the Haberdashery Department at Myers in Bourke Street. In 1939 with the outbreak of WWII, she joined the WAAAF (Women’s Auxiliary Australian Air Force) and served for 7 years until 1946, after the conclusion of the war. “I stayed around because I wanted to make sure the job was finished properly”. She served as a steward, a personal assistant to high-ranking officers.

After the war, she married, settled down and raised her family. Having outlived her husband, Margaret lived independently until the age of 94 when she relocated to Homewood. “I love it here. I love the staff; I have lots of friends, a lovely room and my family visit regularly”.

Margaret attributes her longevity to a healthy life and plenty of exercise. She did not drink or smoke, and she still walks around the entire facility every day. Her daughters say she is strong willed and feisty.

Margaret received congratulatory messages from the following luminaries: The Queen, The Prime Minister, The Governor General, The Premier of Victoria, The State Governor, the local member of Parliament, and the CEO of TLC Aged Care. All these messages adorn the walls of her room, but the pride of her collection is and always will be photos of her two daughters and her extended family.