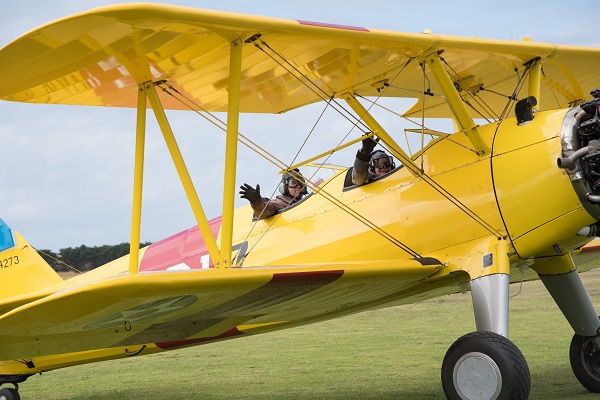 A joyride through the clouds in an open cockpit World War II biplane was an exhilarating way to start the day for Ken Tunley. A resident at Vasey RSL Care Bundoora, Ken was presented with a boarding pass for the specially commissioned flight to celebrate his 100th birthday.

Departing from Tiger Moth World in Torquay, Ken’s personal pilot remarked that it wasn’t often that the passenger was older than the plane.

“The plane ride was fabulous – I really like flying. We didn’t do any aerobatics, but it was great to be up in the air. It reminded me of the times I flew with my sons,” Ken said.

It wasn’t Ken’s first time playing passenger; he was often invited aboard light aircraft flights while two of his sons were undergoing aviation training.

Ken’s children – born not long after the Second World War – watched from nearby as the plane took off. A loop-the-loop was out of the question, but Ken relished the expansive views of the Great Ocean Road, crisp air and feeling of complete freedom.

Mother Nature called in a favour, delivering clear blue skies for the veteran’s birthday flight. The treasured moment was gifted to Ken as part of Vasey RSL Care’s Hero’s Wish program, honouring veterans and war widows for service to their country.

Ken was conscripted for active service during World War II when he was 22 years of age. Born in Sydenham in south-east London, Ken worked as a plumber for the army, building shower blocks and water services. He remained in active service for six years, before being demobbed. A few years later he and his wife decided to emigrate from the UK to Australia.

Yesterday, Ken laid a wreath during an ANZAC Day service at Vasey RSL Care Bundoora, paying his respects to the men and women who have given their lives, and those who continue to serve around the world today.

Vasey RSL chief executive officer Janna Voloshin said ANZAC Day was an annual reminder of the courage, honour and strength shown by all men and women in world wars, as well as those enlisted in active services across the world today.

“These men and women have helped shape Australia and create the freedom we enjoy today,” Ms Voloshin said.

Through the Hero’s Wish program, Ms Voloshin said they had been able to make numerous wishes come true for veterans and war widows in their community.

“It is a real pleasure to give back to those who have done so much for our country,” she said.

“We can never repay them for the sacrifices they made, but we show a small token of our appreciation through the Hero’s Wish program. The program has been launched to help them achieve a goal or a long-held desire, something that may not otherwise happen.

“We encourage family members and friends to nominate wishes for the people they admire, love and respect. The smile on Ken’s face when he went up in the plane was priceless. We want to be able to bring that smile to more people in our community.”

Kevin Brady, a Vietnam veteran living at Vasey RSL Care’s Independent Living Village in Geelong, recently had his wish granted. As a small token of respect for his time in active service, Kevin received a new number plate for his car, quoting his Squadron number.

Hero’s Wish is open to anyone in the Vasey RSL Care community with an ex-service background, with no limits on the wishes people can request.

Vasey RSL Care is a not-for-profit aged care organisation and welcomes donations for the Hero’s Wish program. To find out more about making or granting a wish, visit www.vaseyrslcare.org.au/heros-wish/