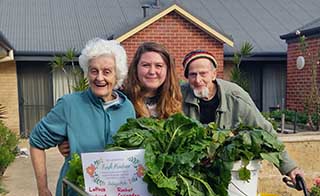 Projects to encourage people living with dementia to reminisce, participate and feel more connected with their Margaret River environment are now possible thanks to a $30,000 grant from Alzheimer’s WA and the Royalties for Region scheme.

The modifications were made after an environmental audit by Alzheimer’s WA, in collaboration with Baptistcare Mirrambeena, suggested the inclusion of visual cues to aid the cognitive function of residents living with dementia.

She added that some of the funding was also used to commission photographs of historically significant scenes of rural and urban Margaret River. The specially selected images were enlarged and placed on canvas for display at Baptistcare Mirrambeena.

Dementia is an umbrella term to describe changes in cognitive function resulting from damage to brain cells from conditions such as Alzheimer’s disease. Commonly, people with dementia have poor short-term memory which means they can struggle to remember recent times yet are able to recall events and places from their distant past.

Julieann said that 75% of the residents at Baptistcare Mirrambeena have a long connection with the Margaret River area and are very familiar with the scenery and landmarks depicted.

“The Margaret River Hotel built in 1936 held a lot of memories for our locals and was included in the collection.”

“Residents, staff and volunteers worked together to choose the most popular and appropriate images,” she said.

Baptistcare has more than 45 years’ experience providing care and residential living options for Western Australians in their senior years.