Taking A Trip Down Memory Lane As Lives Are Celebrated 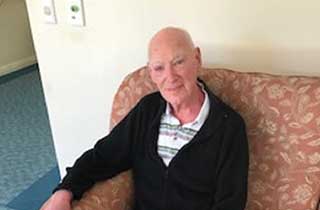 International Day of Older Persons on Monday 1 October will be a special time for residents at Mercy Place Mandurah.

The not-for-profit aged care home will be celebrating its seniors and the contributions they have made to their communities, while at the same time asking a number of residents to take a trip down memory lane and talk about their interesting lives.

One willing resident is 89-year-old Richard Heraty, who was born halfway around the world in Glasgow, Scotland in 1930.

Mr Heraty left school at 14 years of age and started an industrial electrical apprenticeship, which he completed in 1951. Soon after, he was called up for National Service, where he spent two years, mainly in Egypt, living in a tent and helping to protect the Suez Canal.

On his return to Glasgow, he met his first wife Nancy at a dance. They were married in 1955, before he then accepted a job opportunity at South Georgia Island, in the southern Atlantic Ocean, for 16 months.

“The journey was by sea, and our first stop was in Holland for one week. We travelled on board a tanker, which refuelled at Tenerife, before finally arriving at South Georgia Island, 900 miles away from Antarctica,” Mr Heraty recalls. “My duties were to repair the small whale catching boats that were in the harbour for the off-season, and then travel out to sea on the factory ships when the season opened again.”

After returning to Glasgow, Mr Heraty and his family made the decision to move to Australia in 1962, which saw them travelling on the ship The Canberra for 19 days, stopping off at Malta for refuelling.

“Our son had his first birthday on the ship, he had learned to walk prior to us setting sail, but lost the ability to do so while on the ship, which meant he didn’t walk again until he was once again on solid ground,” laughs Mr Heraty.

“When we arrived, we were all very excited about our new country, and to find sunshine after so many years in Scotland.”

“There are many amazing residents like Richard at Mercy Place Mandurah who have had incredibly interesting lives, and in some cases were born thousands of miles away from Australia,” she says.

“During that time they have, in many cases, served their country and dedicated a great deal of time to their community, and that’s why everyone here was keen to highlight the important contributions that so many of our seniors have made to society over many, many decades.”

The United Nations' (UN) International Day of Older Persons is celebrated annually on October 1 to recognise the contributions of older persons and to examine issues that affect their lives.