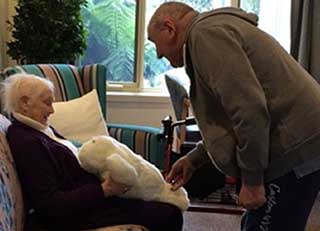 PARO (derived from comPAnion RObot) is a robotic baby harp seal with lifelike features that respond to movement, touch and speech. Created by Mr Takanori Shibata as an aid to manage emotional and behavioral symptoms which can manifest with Dementia, such as anxiety and aggression - with a goal of reducing the reliance on pharmaceutical intervention.

There has been proven success in trialing the fully engineered robot in Aged Care, symptoms of cognition disorders are dramatically improved and there has been demonstrated physiological and social benefits including the treatment of minor depression.

Why a Seal? During the introductory trials of PARO, it was noted that using domestic animals such as a cat or dog could potentially spark fearful memories in some, however, a seal would allow a much more pure interaction.

The use of Pet Therapy programs in Aged Care have been widely used to provide residents with companionship. PARO offers a more immediate approach in comforting and calming residents experiencing a period of agitation.

The introduction of PARO to McKenzie’s Lynbrook Park residence has been well received by staff, families and residents, with noticeable differences in social and sensory engagement through petting, holding and talking to PARO. One resident, who had been non-verbal for some time was able to express feelings in clear sentences, stating “he is absolutely beautiful”.  Through ‘showing off’ PARO, residents were able to connect with others by sharing their admiration for the animal. The trial results have been extremely positive!