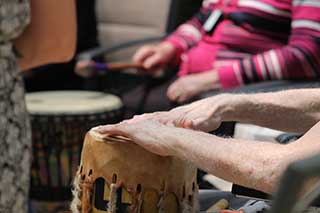 Every Tuesday afternoon, the sound of drums drifts over the streets of Goolwa thanks to a music therapy trial that is reaping benefits for residents, staff and volunteers at ACH Group residential care home West Park.

Music therapist Heather Seyhun, who also works as a massage therapist at West Park, brought in her own collection of drums from Africa and Brazil to begin the trial. Three months on, she says she’s amazed at how the group has evolved and the positive changes she has witnessed.

“When we started out, people were a bit unsure, because most had never hit a drum before, and felt outside their comfort zone,” she says. “Now they’re loving it, and they’re getting really good.”

Heather has seen improvements in wellbeing, socialisation, self-confidence and mobility.

“I know from my own experience that there is a great joy in being able to lose yourself in music, lose your thoughts and just play, no matter how old or your level of ability,” she says. “You can see the enjoyment, the new friendships – playing music with others creates a special bond.”

Heather has worked at West Park for eight years and is also a talented musician who plays guitar and sings in a band. She completed her three-year music therapy course last year and set out to put her theories to the test.

“I had preconceived ideas about how I would ‘teach’, but we create our own flow every week; alternating between a couple of rhythms, changing the volume, cooperating with one another, using non-verbal communication.

“Watching people with physical limitation participating, growing in confidence and supporting each other is so rewarding.”

West Park Care Worker Jane Young says the music had a positive influence on staff and volunteers. “We had interest from the wider community, who wanted to know where the drumming was coming from, so we’re planning a public performance.”

She says research around the world has shown that people who are active and socially connected have a better sense of wellbeing and overall health, regardless of age or health status.

“The drumming group is a good example of ACH Group’s ‘Healthy Ageing’ approach that aims to make it as easy as possible to help people living in residential homes to remain physically, mentally and socially active.”

Find out more about ACH Group.