A Thoughtful Donation From Rockingham Local Puts Reg Back on Track 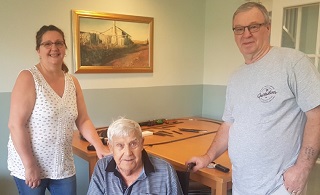 As a deaf client living with dementia and macular degeneration at Brightwater’s Madeley residence, Reg had little desire to socialise and was spending a lot of time isolated in his room.

Through ongoing interaction, staff discovered that Reg had a love for all things trains. He asked for a table to be placed in his room so he could assemble his beloved train tracks but there was a hitch:  his room was too small to bring a table in while maintaining a safe environment.

With some careful rearranging, staff rearranged the room to take in a dining table that fitted his room perfectly. When Gerald, a Registered Nurse at Brightwater Madeley, got wind of Reg’s love for trains, he placed an advertisement on Gumtree to see if anyone had any retired train sets for sale.

Staff were delighted when a Rockingham man contacted Gerald to donate his entire collection, and even drove to Madeley to deliver it. However, the issue now arose of having too much track for his small table – what a lovely ‘problem’ to have!

Staff decided to set up a quiet area with two tables, and helped Reg assemble the tracks that were donated. Reg now spends the majority of time out of his room, with his trains! The Madeley staff, including Gerald, are thankful to the kind-hearted stranger who helped a team work together to keep Reg connected to his hobby, and support his ongoing happiness and wellbeing.

Find out more about Brightwater.