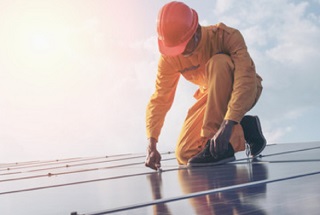 Regis has partnered with Planet Ark Power to install more than 4,400 solar panels, capable of generating 1.6MWs of electricity. The total area of the solar panels is 8,564 square metres, enough to cover 33 tennis courts!

“It’s really important for corporate Australia to play a strong role in ensuring we move towards a carbon neutral economy,” said Paul Klymenko, CEO of Planet Ark, “It is great to see Regis taking this major step in their sustainability journey, and we look forward to continuing our collaboration which has environmental and economic benefits for Regis and their residents.”

Regis has also partnered with Shine On to install over 15,000 LED lights.

James Johnson, Managing Director at Shine On said, “Shine On is delighted to be working with Regis on this multi-site LED lighting upgrade. In addition to improving the quality of lighting for residents, our market-leading lights will enable Regis to achieve greater energy savings. With the LED upgrade alone, they are set to reduce their CO2 emissions by over 2,400 tonnes per annum.”

The LED and solar rollout will be completed by August 2019.

The installations are estimated to see an annual reduction of up to 20% in electricity consumption and around 3,700 [tonnes of CO2-e] in greenhouse gas emissions across the homes in New South Wales, Queensland, South Australia, Tasmania, Victoria and Western Australia. Energy reduction through solar and LEDs is equivalent to removing around 1,500 cars off the road each year, 1.3 million kgs of coal burnt or 450 million smartphones being charged.

The investment for the program will pay itself off in just under four years.