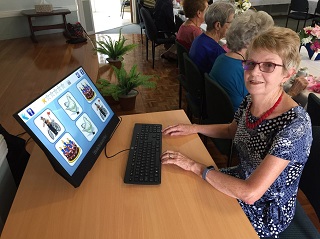 Carinity Kepnock Grove is seeing positive results from the use of brain training technology designed to stimulate the memories and cognitive capabilities of older people with dementia.

A Brain Trainer Plus computer gifted to Carinity Kepnock Grove is keeping its residents mentally active and engaged through the power of games.

The technology was created based on theories citing the benefits of play therapy on older people and those with dementia or Alzheimer’s or suffering from depression.

Carinity Kepnock Grove Residential Manager Jodie Little says the Brain Trainer Plus is making a huge difference in the lives of residents with dementia.

“The technology has helped some dementia care residents to better engage with others. They reminisce, they talk about the old days it also allows them to feel accomplished and rewarded,” Jodie says.

“Residents that I had not heard speak or talk to other residents were engaging and laughing, we all had tears of joy in our eyes. We have quite a few residents that request the brain trainer so they can use it at their own leisure.

“Activities on the device range from trivia and quizzes to games matching colours and recognising old songs, all intellectual stimulus designed to sharpen residents’ minds and enhance their thought processes.

“There are different levels from quite easy to very difficult so anyone at all can use equipment. With its touch screen it’s very easy to use.”

Costing around $5,000, the Brain Trainer Plus machine was purchased with funds raised by Friends of Kepnock Grove, a group of Bundaberg residents which has been supporting local seniors since 1994.

Over the past 25 years the auxiliary group has raised almost $180,000 to support Carinity Kepnock Grove and its residents.

Friends of Kepnock Grove President Pauline Langford says the positive reaction of residents to Brain Trainer Plus had motivated club members to increase its fundraising efforts to purchase a second device for Carinity Kepnock Grove.