Lizards and Snakes and Dragons, Oh My! 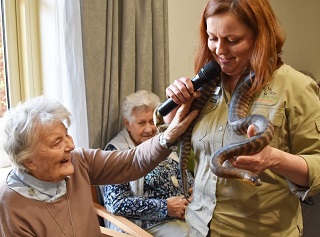 In June, Resthaven Malvern residents enjoyed a visit from the ‘Warrawong 2U’ team, who brought with them a selection of native animals for residents to touch and hold during an informative presentation.

This is the second time that the ‘Warrawong 2U’ crew has visited Resthaven Malvern, having last visited in March 2018.

"Residents loved their visit so much last time that we decided to hold another one," said Lifestyle Coordinator, Felicity Billing.

"This time, the crew brought with them a stumpy tailed lizard, a bearded dragon, and a selection of snakes."

"One of these snakes was extremely friendly, winding itself around my head!"

Warrawong Wildlife Sanctuary was founded in 1969 by Dr John Wamsley. At its peak, it occupied 85 acres and housed a flourishing native Australian ecosystem. However, the owners ran into financial difficulty and were forced to sell, leaving 28 acres of land surrounded by feral-proof fencing. It was abandoned in 2013.

David and Narelle, zoo owners in Western Australia, bought Warrawong in January 2017, and it officially opened to the public in late 2018. The mobile ‘Warrawong2U’ service means that the native animals are brought to meet the people, rather than visiting the Adelaide Hills sanctuary, and is a much appreciated service.