A Surprise Wedding at Resthaven 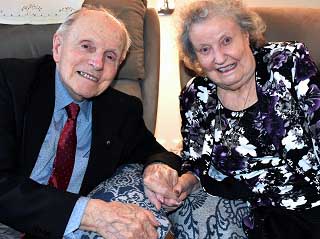 Mr John Minns and Mrs Yvonne Bails have been together for 19 years, but it wasn’t until after moving into Resthaven Aberfoyle Park, that they decided to tie the knot!

John and Yvonne met at a bereavement group, after both their partners died from cancer in the same month.

"The Daw House Southern Hospice signed us up to the same bereavement group—we hadn’t met before that", says John.

"After a time in the group, we got to know each other well. We also discovered that we had some mutual friends. Luckily enough, they gave good report cards for each of us!"

"We went out for lunch one day, and that was that—we’ve been together ever since."

During their time together, they lived in Yvonne’s home at Aberfoyle Park, near the old Homestead. They spent a lot of time travelling New Zealand and the Pacific Islands in coaches, on tours and on cruises.

"We really loved travelling together, spending our retirement exploring our region and learning about different cultures."

After moving into a large room for a couple at Resthaven Aberfoyle Park, John began pondering his upcoming 90th birthday.

"I knew we wanted to celebrate with the family, so we organised a High Tea at the Lenzerheide Restaurant in Hawthorn. What we didn’t tell our guests was that it was also going to be our wedding day!"

"My sons were trying to help arrange the celebration, and couldn’t work out why I was being so difficult."

"Yvonne had passed her daughter a silk horseshoe as a hint, and she cottoned on straight away."

"After birthday greetings and speeches, a birthday cake was brought out, followed by a wedding cake. Everyone was shocked!"

"We’d organised a wedding celebrant, keeping it a secret from everyone who was going to be invited."

But the greatest difficulty, says Yvonne, was keeping the wedding surprise a secret from her daughters, "Keeping such a big secret from my daughters was so hard, but we were rewarded by their great support for us."

The couple are very pleased they are finally married, and their happiness is evident on their faces. John says, "I’ve signed on to be married to Yvonne, and we couldn’t be happier. And I’ll sign on for another 10, in increments of five!"