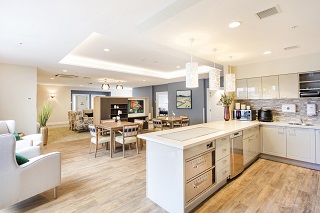 ADCO Constructions has been awarded the Master Builders Association of Victoria (MBAV) Excellence in Construction of Commercial Buildings $20M-30M million for Benetas’ purpose-built aged care facility The Views at Heidelberg.

The 103-bed state-of-the-art residence in Melbourne’s North East opened in October 2018, and was designed to support the industry-leading Benetas Best Life Model of Care, which consists of apartment-style living creating a genuine household environment for the residents.

“ADCO did a fantastic job on The Views, which was a really important development for Benetas,” she said.

“It was our first building constructed from the ground up to accommodate the Best Life Model of Care and ADCO exceeded our expectations.”

Benetas’ Acting General Manager of Strategy, Infrastructure and Housing, Bruce Webb says the project was a success from start to finish.

“ADCO were immensely professional throughout the entire process, and a wonderful company to work with.

“ADCO is excited to have received the MBAV Excellence in Construction of Commercial Buildings $20 - $30M award for Benetas’ The Views at Heidelberg,” he said.

“The Benetas team, together with the incumbent consultants led by Smith + Tracey Architects, worked seamlessly under a Design and Construct procurement model to deliver this challenging and very successful project.”

The Views at Heidelberg will shortly celebrate its first year since last year’s launch. Feedback on the Best Life Model of Care and the building itself has been overwhelmingly positive.

This win is in addition to the MBAV award for Commercial Builder of the Year in the South East region that went to BFN Developments for their work on Benetas’ Dalkeith Gardens’ extension and refurbishment in Traralgon.

Find out more about Benetas.