Maureen’s Wish Is A Hit With Residents at Juniper 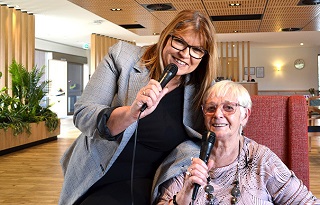 The gift of a lifetime of music, entertainment and laughs is being shared with family and friends thanks to a novel idea to give elders more choice in how they live their lives. Read more about Maureen's story and how she is changing people's lives through song.

More than 50 years ago a young Maureen Davies with her husband Richard immigrated to Australia from the UK to set a new life for themselves and their two daughters.

After arriving in WA with his family in 1966, Richard, an entertainer, singer and comedian, soon joined Perth’s famous Tivoli Theatre and took to the stage as Dick Morris.

“I didn’t perform then,” said Maureen, “I’d take along my little grandson to go along and watch.

“Then one of the senior ladies left and the producer Dorothy said ‘you can get up there’. I said, ‘you’re not putting me up there, I’ve never done that!’”

Dorothy was insistent and Maureen eventually found her stage feet.

“I did it slowly but I got there and I was doing solos before I finished,” Maureen said proudly.

Maureen counts the times she spent sharing the stage with her late husband as her fondest memories, recalling him lovingly as a funny man who loved the theatre and entertaining.

“I didn’t have him as a partner though, apart from doing the odd duet together, because he’d end up telling me what to do!

“I didn’t want that, so I had another partner and he had someone else on stage but we loved doing the outdoor concerts together.”

As Dick Morris, Richard spent about 40 years on stage and ultimately entertaining audiences in nursing homes and retirement villages with Maureen until he succumbed to leukaemia at the age of 83.

Maureen’s own health setbacks saw her moving from hospital to a number of residential aged care homes. At Juniper Hayloft, she maintains a great friendship with Mary Mews, the residential manager at the Martin facility.

Mary has a passion for people and is working hard to make sure that she and her staff can meet elders’ needs so that they may live their best life. She has created a range of new ways to personalise aged care services for her residents and her innovative ‘make a wish’ program has definitely struck a chord with Maureen.

“Residents give their ideas, their choice of what they want to do and when we have a wish, we would try our hardest to make it come true,” Mary said.

Maureen “wished for karaoke” and the installation of a karaoke machine has been a hit with residents who love to sing together and for others.

Before too long Maureen found herself singing to an audience after a very long time offstage.

“After the first couple of times it did not worry me at all, how I’d go singing outside in front of the public I don’t know, but I’d give it a go, it makes you feel good!”

To find out more about Juniper’s person-centred care and accommodation call 1300 313 000.