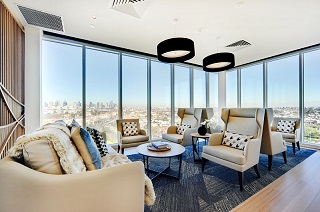 The announcement of the 2019 Australian Business Awards has seen the launch campaign for TLC Aged Care’s Clifton Views recognised as an ABA100 Winner in the category of Marketing Excellence. Clifton Views was officially launched on 24 August 2018 with a rooftop function overlooking the Melbourne skyline that was attended by over 200 guests. The opening event was the culmination of a multi-channel marketing campaign that incorporated radio, television, digital, print and display advertising.

CEO of TLC Healthcare, Lou Pascuzzi says that winning an ABA100 award in a category as competitive as Marketing Excellence is a defining moment for the organisation.

“The launch of Clifton Views onto the Australian aged care market represents two years of hard work by TLC’s Marketing Team. This iconic home is the first 10-level development in Australia solely dedicated to residential aged care, so we had an interesting story to tell. The level of excitement around the opening of Clifton Views was a testament to the success of our marketing campaign and the skills of my team.

“I am as proud of this marketing campaign as I am of the entire Clifton Views development. The planning and execution of the campaign was impeccable, and winning this prestigious award is confirmation of that. Some of the most innovative and successful marketing campaigns in Australia have been past winners of this award, and I am delighted to say that TLC is now amongst them.”

“Each year the ABA100 Winners are recognised for their innovative initiatives, products and services, which are leading business and digital transformation within the Australian marketplace,” Ms Johnston added.

The World Business Awards Framework (WBA Framework) is utilised as a structured model of assessment that enables the participating organisations to be benchmarked against world class performance standards. The award recipients are recognised as the elite of their industry earning a place amongst a distinguished group by having their achievements acknowledged and celebrated.