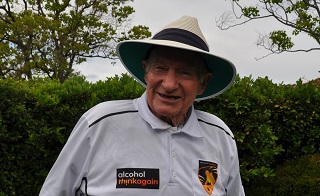 International Day of Older Persons on Tuesday 1 October will be a special time for residents at Mercy Place Edgewater.

The not-for-profit aged care home will be celebrating its seniors and the contributions they have made to their communities, while at the same time asking a number of residents to take a trip down memory lane and talk about their interesting lives.

One willing resident is 74-year-old Kenneth Thorpe who was born on the other side of the country, in Moss Vale, a town in the Southern Highlands of New South Wales.

Born into a family of 13 children, Kenneth and his siblings always joked that they had more than enough players for a cricket team, and the active family grew up involved in the whole gamut of sport, including tennis, hockey and rugby league.

But it was cricket that was Ken’s first love, and he went on to pass his umpiring exams in New South Wales, and then his state cricket umpiring examination, which needed a pass mark of 83 per cent.

After moving to Perth to be closer to family, Mr Thorpe continued with his cricket umpiring for many years, until he had a stroke in December 2017.

“There are many standout games I recall vividly, including a game involving Sir Richard Hadlee from New Zealand, one of the greatest fast bowlers and all-rounders in cricketing history,” says Mr Thorpe, who also volunteered at the Sydney Olympics in 2000, and was also a Justice of the Peace and a Scoutmaster for many years.

“Cricket has been a great love of mine, and I’ve had a much fulfilled life. My motto has always been that ‘you can’t say can’t, after all the first three letters are c-a-n’, and certainly helping out, helping others and volunteering in the community havea lways been great passions of mine.”

“There are many amazing residents like Ken at Mercy Place Edgewater, all of whom have had incredibly interesting lives, and International Day of Older Persons is the perfect opportunity to recognise them and to hear their stories.

“Ageing well is something that we particularly value at Mercy Health. We’re focused on enabling our residents to live enriched, full lives, throughout their 70s, 80s, 90s and beyond.”

The United Nations' (UN) International Day of Older Persons is celebrated annually on 1 October  to recognise the contributions of older persons and to examine issues that affect their lives.