AnglicareSA: When Aged Care Goes Beyond 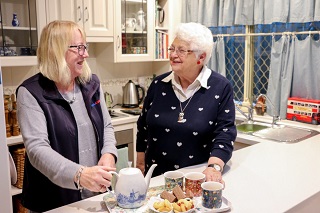 For more than 10 years, Judy and Jo have shared a special bond that goes beyond a care worker-customer relationship. Jo’s support has enabled Judy to enjoy the independent lifestyle she deserves – together they carry out activities like cleaning the house, doing the gardening, sewing repairs and shopping.

“I can be down as down and Jo will know just the right thing to pick me up again,” Judy said.

“To have someone there who knows me and understands me for all these years – I couldn’t have coped without her.”

When she first met Jo in 2009, Judy had been caring for her late husband Frank for around 16 years.

As Frank’s dementia deteriorated, Judy was in desperate need of respite and support.

“It was getting hard for me to maintain the house and garden and care for Frank – as his nature changed, it became overwhelming.

“For years I didn’t have a full night’s sleep – I was having to get up every two to three hours and that’s when I knew I needed support.”

Judy and Frank had no children and were inseparable since day one.

Judy’s doctor had recommended that Frank enter a nursing home, but having shared almost every moment together for more than 50 years of marriage, Judy was reluctant to part ways.

After serious thought, Judy reached out to AnglicareSA for support in their own home.

“We always did everything together and when there’s just been the two of you, it’s daunting to let somebody else come into your space,” she said.

“But when I opened the front door and met Jo – there was something there.

“She soon became a part of our family.”

The couple first met at an Adelaide tenpin bowling alley — Frank moved lanes right next to Judy’s friends to catch her attention.

In understanding Frank’s hesitation towards welcoming strangers into his home, Jo went out of her way to find common interests to bring them together.

“Frank was originally from Hungary and I’m from Norway – so immediately we had that European connection,” she said.

“When I first met Frank he was well enough to talk to me about his childhood, and so as his dementia worsened we could talk about when he was young, because they often go back to that.”

According to Judy, Frank “adored” Jo – and as he became comfortable spending one-on-one time with Jo, Judy was able to enjoy some time away from caring.

“Judy used to go out and see her friends and I’d take Frank out shopping – they had trolleys you could connect to the wheelchair which made him feel like he was helping,” Jo said.

“He’d kiss my hand and say thank you so much for looking after me. It was just in his culture.

Judy and Jo often reflect on the wonderful memories they have of Frank in his twilight years.

Judy believes Jo’s support allowed the couple to enjoy life together at home for years longer than they imagined.

And when Frank could no longer live at home, Jo remained Judy’s rock.

“Even though he didn’t know who I was… It was incredibly hard to let go, and the hardest decision I’ve ever had to make,” she Judy said.

“If my darling Jo wasn’t around to help me through that time, I don’t know what I would’ve done – I really don’t.”

Jo is always looking out for Judy — providing both physical and emotional support.

“At the end of the day, you don’t need sympathy… you need support,” Judy said.

“I believe as a care worker you need to be able to communicate well, be willing to get to know people, and most importantly smile, laugh and provide a hug here and there.

“When Frank passed away, Jo was the best ever in terms of helping me get over these things – having her around enabled us to enjoy great memories.”

After working as a domestic assistant for some years, AnglicareSA supported Jo in becoming an accredited care worker.

Jo said regular training and development allowed her to attain the right skills to provide quality and tailored care.

“While as care workers we support our clients, we also require strong support,” Jo said.

“I spent years training and gaining accreditation – and my former coordinator (also Jo) was brilliant in making sure I had the abilities to deal with the complex situations associated with dementia.

“Judy and Frank were my first clients, and I believe I was able to develop such a special relationship because I was prepared with the appropriate knowledge and understanding.”

Find out more about AnclicareSA.