RSL LifeCare's Intergenerational Playgroup Highlights Importance of Giving To Each Other 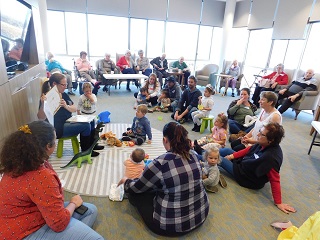 Forming connections and feeling useful are some of the results from a new playgroup established on the NSW Far South Coast at RSL LifeCare’s Albert Moore Gardens, Merimbula. Since May, the aged care home has hosted an intergenerational playgroup in which the basic human need “to give” has being realised.

Research into intergenerational play has clearly shown the positive outcomes of the very young and very old being in each other’s company.

“Many of our residents are long-time members of the community,” Albert Moore Gardens’ manager and registered nurse Julie Evans said. “Having that connection with the local area is very important to them, and to the staff here.

“There is mutual benefit. The older people feel as though they are assisting the parents of the little children. And the parents feel that by bringing their kids they are helping the oldies. As well as receiving love, it’s about feeling useful.”

Mrs Evans cited community groups that visited Albert Moore Gardens such as the Brownies and Duke of Edinburgh High School students. Playgroup, as it is known, was another form of community involvement for the aged-care facility.

Residents were given the option to attend and Mrs Evans said there were usually about 15 of the seniors who participated.

Those who took part could either be passively involved or “get their hands dirty” playing games, singing songs, storytelling or using playdough.

Morning tea was also served during the time.

“One of our residents used to be our town’s Debutante Ball co-ordinator,” Mrs Evans said. “She recognised one of the mothers at Playgroup as someone she helped ‘usher into society’.”

Another was a teacher and she reportedly enjoyed using those skills once more; she said she “loved” Playgroup.

“A number of the families who attend are from low socio-economic backgrounds, not being able to afford a lot,” Mrs Evans said. “In coming here they feel like they are making a contribution.”

This is a community group but it was started by a local church, the Sapphire Life Church in Merimbula.

“Not all the children have grandparents, so there is that surrogate grandparent element,” she said.

“The children are learning how to respect and have fun with people of different ages. The residents have much to give – they’ve been down this road. They are full of wisdom.

“They are so patient and beautiful with the children.”

Mrs Fernando said more than 30 families had registered with Playgroup. “We’ve been absolutely thrilled with the response,” she said.

“The residents are very eager and each week they are ready and waiting for the children to arrive. As the kids come through the door their faces light up.”

She said some of the frail were unable to participate in activities but were still able to hold, for instance, a 6-month-old baby, while mum had a chat with other mothers.

Mrs Fernando said that in her time running the group she’d heard stories about a number of residents who did not attend any activities save for Playgroup.

Find out more about RSL LifeCare.