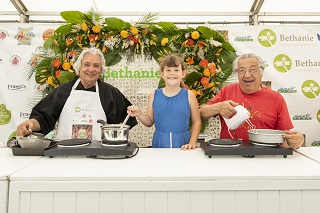 After a big morning cooking in front of a live audience at Have a Go Day, Bethanie, Western Australia’s most recognised not-for-profit aged care and retirement living provider is excited to announce the winners of the 2019 Big Bethanie Bake Off.

The Grand Finale was held live from Burswood Park on Wednesday 13th November at the Seniors Recreational Council of WA’s Have a Go Day, a LiveLighter event.

Continuing the aim of closing the intergenerational gap, the competition saw four finalists from the senior and junior categories cook their favourite family recipe, accompanied by a story reflecting their family’s life, culture and history.

The event was hosted by West Australian Foodie and Media Personality, Verity James and accompanied by a panel of judges including Patrick O’Brien, Executive Director Hospitality and Trades West Coast Institute, Food and Lifestyle Blogger Belinda Cipriano and Chris How, Bethanie CEO.

Bethanie CEO Chris How comments, “We had a wonderful day at our sixth annual Bake Off. As usual I delighted in being able to try every dish, but the real joy came from hearing the stories behind where the dishes came from, many being handed down from one, two or sometimes three generations.”

Winners of the 2019 Big Bethanie Bake Off:

Big Bethanie Bake Off Champion Errol says, “I learnt this recipe after watching my mum cook. Later in life when I was working in a second-hand disposals company, somebody smelt how nice my lunch was and asked me to come and work for him in his restaurant, ‘A Touch of India’ in Scarborough.”