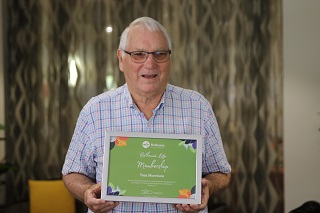 Bethanie, Western Australia’s most recognised not-for-profit aged care and retirement living provider has awarded one of their volunteers with a Life Membership, as recognised by the Board.

88 years young, Tom Morrison from Tuart Hill, has been involved with Bethanie for over 55 years, volunteering his time in various roles such as a Church Pastor, conducting services at Joondanna, Bethanie on the Park, Geneff and Warwick.

Tom’s first dealings with Bethanie were in the very early days of Bethanie Joondanna, where he recalls connecting with the original Bethanie Board after the purchase of the Joondanna land and the subsequent ‘rallying of the troops’ to ensure that Churches of Christ Age Care Homes opened.

Tom’s first wife, Pam, was also actively involved with Bethanie as a staff member at Joondanna where Tom volunteered driving the bus, doing gardening and assisting with Sunshine visits and church services.

Tom has recently had two knee surgeries but that isn’t holding him back – he is already rostered on to do a service at Bethanie Geneff before the end of the year.

Bethanie CEO Chris How says, “On the recommendation of the Bethanie Board, we are pleased to award Tom Morrison with Life Membership, in recognition of his outstanding service to Bethanie. With over 4,500 Western Australians in our care, we simply couldn’t operate without our 550-odd volunteers.

“Whether it’s through social interaction with a resident, participating in games, playing music or helping with the dishes, volunteers like Tom are invaluable and we truly thank him for his service.”