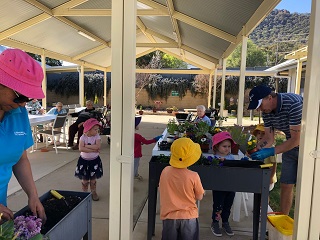 Improved life skills are some of the benefits experienced by residents of RSL LifeCare’s ADA Cottage after they host preschoolers for interactive play.

The children were from Rylstone-Kandos Preschool in the NSW town of Kandos.

“The residents enjoy seeing the children – their faces light up,” recreation activities officer Tracey McKay said. “They become quite excited when I tell them ‘the kids are coming’.”

Moreover, ADA Cottage manager Linda Wallwork said distinct improvements could be seen in the lives of the older people.

“I can say that from a social point of view the residents have better conversation after time with the children,” she said.

She also cited improved outcomes in basic tasks such as eating and drinking.

Yet teacher Sandra McIntosh said the little students had been going to ADA Cottage “for the last few years”, effectively pre-empting the high-rating doco.

She said these visits had allowed the children to view a different way of living. “They see that not everyone lives in a house with a family,” she said. “It’s a new experience for them.”

Ms McIntosh said some of the kids in the town had no extended families. “It’s beautiful to see connections made between some of the children and the residents,” she said.

As well as visiting and “playing” with the retirees of ADA Cottage, the young students also made presents for their older friends. “It might make someone’s day to know others are thinking about them,” she said.

On one occasion, the kids and the residents planted flowers and, during a later visit, watered and checked on them.

The two generations also read books to one another during story time, taking turns.

“To date, these (interactions) have been informal but I think this could become part of the Cottage’s recreational program,” Mrs McKay said.

Find out more about RSL LifeCare.