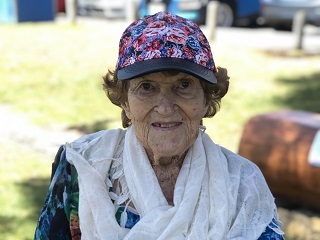 Mercy Place Mandurah will celebrate the achievements of its female elders on International Women’s Day, which falls on Sunday 8 March.

And at the Home’s planned celebratory morning tea, the accomplishments of resident and great grandmother Frances Russell will strike a particular chord amongst Mercy Health’s nursing staff.

The 93-year-old, who was born in Subiaco on 15 July 1927, will be celebrated for teaching several generations of West Australians to swim, often between the two jetties at Mandurah foreshore, which she remembers as being full of jellyfish.

Between 1964 and 1988, she also taught orphans from Fairbridge Farm to swim in the river, which also took some courage, as the river was rife with leeches.

“I became very attached to these children and would attend their school assemblies and end of year performances,” says Ms Russell. “The jellyfish and leeches never stopped me though, I just loved helping the children.”

Over close to three decades, Ms Russell also taught children how to swim from as far afield as Subiaco to Mandurah, North Cottesloe to Fremantle and Innaloo to Rottnest.

Indeed, the professional swimming instructor was attracted to the ocean at a young age, meeting her future husband - Graham Russell - at North Cottesloe beach, when he reportedly threw an apple core at her and told her she had skinny legs.

The rest, as they say, is history and the couple were married for 65 years and shared a passion for swimming and the ocean during that time - they were both heavily involved in the North Cottesloe Surf Club for over 60 years and were regular attendees at the annual Australian Surf Lifesaving Championships.

“International Women’s Day gives us the opportunity to focus our attention on our female residents, to both recognise their achievements and also the contribution they continue to make to our Mercy Place Mandurah community,” says Ms Venables.

“Frances, in particular, can be very proud of her contribution to the WA community as a woman who not only taught thousands of young West Australians to swim, but encouraged a love of the ocean.”