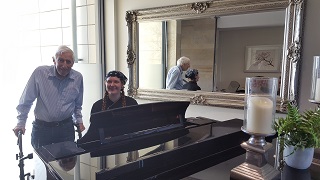 Septuagenarian Ross and 28-year-old CJ discovered earlier this year that they both held a passion for playing musical instruments, particularly the clarinet.

By his own admission, Ross ‘fell in love’ with the sound of the instrument when he was just 14 years old, having been taken down to North Cottesloe Beach by his parents on Sunday mornings, where jazz was played in the open air over the beach broadcasting system.

In comparison, CJ studied the clarinet at both primary and high school, but it was only after hearing Ross play the woodwind instrument during an afternoon event at Mercy Place Mont Clare that she also rekindled her love for the instrument.

And as a consequence, over the past few months Ross has become a mentor to CJ, helping her to relearn how to play the instrument and introducing her to the music he played when he travelled with his three piece jazz band around Europe.

“When I heard Ross play the clarinet earlier this year I just thought wow, that is such a lovely sound, I would love to be able to play like that,” says CJ who is employed as a full time chef at the not-for-profit aged care home’s kitchen.

“When Ross asked me if I would like to learn how to play the  clarinet again, I jumped at the opportunity and made a point of staying back after work a couple of times a week for an hour or so to have a lesson with him.

“We also listen to music together and I’m really enjoying being introduced to his favourite Gilbert and Sullivan soundtracks. I know he’s keen for us to play a duet together - I think he has some songs from the Pirates of Penzance for us to learn and I’m looking forward to improving enough to do that.”

International Day of Friendship is a United Nations day that promotes the role that friendship plays in promoting peace in many cultures. It is observed on July 30 each year.

“When I was around 14 I bought my first clarinet with the earnings I made at the local post office, and found a couple of fellow jazz lovers from Claremont High,” says Ross, who grew up in Nedlands, attending the local primary school before going to John Curtin College of the Arts and studying psychology at the University of Western Australia.

“Our first gig was at Scotch College’s dance in 1954, a year before Bill Haley rocked around the clock, two years before Elvis wiggled his pelvis, and three years before Jerry Lee Lewis released Great Balls of Fire.

Ross went on to develop a lifelong passion for music, also learning to play the saxophone and flute - but it was his love of the clarinet which was his priority. He twice performed at Edinburgh with his band The Gumnut Stompers.

“We’re fortunate at Mercy Place Mont Clare in that many of our residents have formed strong friendships, and as a result we have a close-knit community where those connections really do flourish," he says.

“And I think both Ross and CJ are delighted to have formed a firm friendship. It’s very special to hear CJ practicing the clarinet, under Ross’s tutelage, and we’re looking forward to hearing them play together soon.