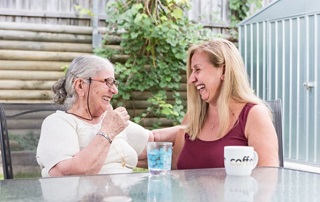 Three out of four people who live with dementia say people don’t keep in touch like they used to, while 65 per cent say people they know have been avoiding or excluding them, results from a Dementia Australia survey have found.

The survey findings, released at the start of Dementia Action Week 2020, reveal just how big an issue discrimination is and the impacts it has for people living with dementia, their families and carers.

Dementia affects close to half a million Australians and that number is set to double in the next 25 years.

Other key findings from those who responded to the survey include:

However, people living with dementia who feature in this year’s Dementia Action Week campaign demonstrate that with a little support, they can continue to live full and active lives.

The theme for this year’s Dementia Action Week, which runs from 21-27 September, is “Dementia. A little support makes a lot of difference’’.

The concept for Dementia Action Week 2020 has been developed in consultation with Dementia Advocates, who have a lived experience of dementia.

The stories and voices that will feature across the week are real. Ann Pietsch, who lives with dementia and shares her story as part of this year’s Dementia Action Week campaign, said it was important to see people living with dementia as being regular, everyday people.

“The stereotypes are that we’re all elderly and we’re all losing our memories and that we can’t really manage anything much,” Mrs Pietsch said.

“There are so many different people with dementia and there are so many types of dementias with all sorts of symptoms. It’s not just forgetting things – it’s more than that. It might be being unable to get organised or organise your day or your thoughts, or having a fuzzy day, as I call it.

“One of the most helpful ways of managing my dementia is to remain positive and to live well with dementia. I volunteer at the museum and I really enjoy meeting people and talking to people. It’s very rewarding.” Theresa Flavin also features in the campaign and, after her diagnosis, she took up horse-riding.

“I found an awesome coach who I really trusted, and she gave me confidence. She was so patient. She broke the whole thing into little pieces of information that my brain could process.

“She gave me that confidence and I felt like a hero – I am just the bee’s knees sitting here on my horse.”

Tim Granger - also part of the campaign – was diagnosed with dementia five years ago. Mr Granger’s weekly routine involves going to the gym with a support worker who often takes photos of his exercises to give visual prompts.

“Exercise gives me pleasure,” Mr Granger said. “It helps me do what I have to do and get things going. I couldn’t live without it, really.”

Dementia Australia CEO Maree McCabe said the survey findings are distressing for people living with dementia, however it would not take much to turn those findings around.

“What these findings say is that discrimination stems from a lack of understanding and knowledge of dementia – what it is and how it impacts people,” Ms McCabe said.

“A little bit of support can make a really big difference to someone with dementia.

“It could be as simple as giving someone space to do things for themselves, listening to the person, not trying to solve all their problems, giving the person time to find the right words or using technology to support someone in their day-to-day activities.

“Tim, Ann and Theresa’s experiences all demonstrate that it really doesn’t take much – a little support really can make a lot of difference to someone’s life.”

To find out more about how to support someone living with dementia, you can head to dementia.org.au/dementia-action-week.