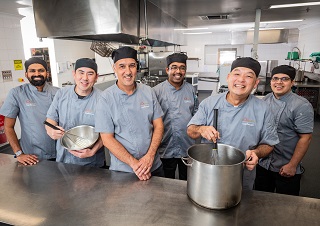 An elite team of five-star chefs are bringing fine dining to Baptistcare residential care facilities across Perth and regional Western Australia as part of a radical new approach to cooking for aged care residents.

From old favourites packed with flavour, to new taste sensations and breakfast buffets, their dishes are delighting residents while changing the face of food in aged care.

Baptistcare’s innovative new approach to cooking for people in residential care is being driven by its Canadian-born Executive Chef Todd Cheavins, who has cooked for celebrities including Pink, Oprah, Pippa Middleton and the King of Malaysia while working in luxury hotels around the world.

“We’re thinking about different flavours, textures, colours and presentation. That’s where the focus is,” he said. “It’s about cooking food properly.

“The attitude to food in aged care has to change. I like to think we’re the trendsetters, but I think the changes are just commonsense.”

Over the past 12 months Mr Cheavins has hand-picked a team of head chefs who bring experience from some of the world’s top hotels and restaurants, including Crown Casino, The Ritz-Carlton Perth, JW Marriott Mumbai and The Westin Singapore, as well as the Brunei Royal Family.

“They don’t have aged care experience. They come from high-end hospitality, and it shows in the way the food at Baptistcare is being cooked,” Mr Cheavins said.

Residents at Baptistcare enjoy a wide variety of meals, including slow-cooked lamb shanks, lemon cheesecake, pancakes with forest berries, herb-crusted salmon, garlic and thyme roast chicken, and slow-cooked beef cheeks. Dishes not traditionally considered suitable for older people, such as beef ribs, corn on the cob and chicken wings, are also on the menu.

“We’re emphasizing choice and selection, and making meals an enjoyable time,” Mr Cheavins said. “Yes, food needs to be nutritious and tailored to residents’ needs, but it also plays a critical role in evoking lovely memories.”

There isn’t a bland, boring, stodgy, tasteless or over-cooked dish in sight.

Even texture-modified foods such as pureed vegetables have had a makeover. The vegetables are now roasted, seasoned, blended with cream and presented in appetizing swirls.

The introduction of a hotel-style breakfast buffet has been a big hit, with residents enjoying the choice of freshly prepared pastries, breads, homemade Bircher muesli and eggs cooked to order while they watch.

“One resident came up to me and said he’d like to make his own omelette. He had a huge grin on his face,” Mr Cheavins said.

“Another resident was on a soft food diet and normally wouldn’t eat his breakfast, but he ate three omelettes. You can’t put a dollar value on that.

Not only are the former hospitality chefs finding their new roles rewarding, they’re enjoying more sociable working hours, shorter commutes and more time with their families.

“We’re no longer looking for the ‘old skills’ traditionally associated with cooking in aged care. Now it’s ‘Do you love to cook?’,” Mr Cheavins said.