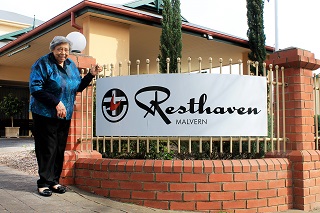 Lifelong learning is vital according to Mrs Beth Robertson of Resthaven Malvern, who gained a Diploma of Arts – her third tertiary qualification – when she was 88 years old.

Born in Adelaide Memorial Hospital on 9 October, 1926, Beth grew up in Adelaide, although moved around a lot during her early childhood.

"My mum had come out here for a visit and got stuck here for the war. They weren’t at all compatible."

"My mother made an effort, but she struggled. Dad was out of work for three years after the war, times were tough. They split up when I was 12."

This wasn’t the only difficulty Beth faced: "Being a coloured person in a white world, you know – it was very discriminatory," she says.

"My grandfather’s name was Vaules Wordie – he was the son of freed slaves in Jamaica. He spoke against the White Australia Policy in parliament. He was a well-known figure."

"I attended Methodist Ladies College, but I didn’t have much teaching from anyone," she explains, "so I made up my own theories on life … but I was way off track!"

"I was never chosen for games, so I thought the best thing to do was not try. Besides, I had a natural streak of laziness."

"But God had given me a good brain I guess."

"We were always a very religious family – we went to church four times on Sundays."

"When I was little, I had a great faith, but sort of lost it in high school."

That all changed when Beth attended a camp aged 16, where she describes how she realised that her "whole life had been coming to know Jesus as my personal saviour."

From that moment on, Beth "went from being bottom of the class, to right at the top of the stadium."

Aged 18, Beth started her nursing training, completing three years at what is now the Royal Adelaide Hospital. Once this was complete, she moved to Melbourne age 21, to study midwifery for 12 months.

On her return to Adelaide, she attended Bible College in Payneham for two years, where she gained her Diploma in Theology.

"I worked in clinics way out on the backroads. I remember at one stage walking 30 miles to get to someone to help them."

After four years working as a missionary nurse overseas, Beth went home for a year, before heading back again. However, a bout of Hepatitis A forced her to come home.

"By then, my mother was in her 80s and I felt like I should stay in Australia," she says.

"I wondered what to do. A friend was doing social work, and I thought, 'I could do that'."

"I remember that I drove along North Terrace in my car, and I thought, 'If I can get a park right outside the uni, I’ll go in.' And I did. My life is full of coincidences like that."

Beth studied for three years, graduating with a Bachelor of Arts and a Diploma of Social Studies.

On graduation, Beth was granted one of only two studentships to work at The Queen Elizabeth Hospital, where she eventually became Head Social Worker.

"Following my engagement to Albert, I resigned from TQEH and worked part-time in other agencies, until my retirement aged 56."

An active retiree, Beth played bowls, tennis and golf, however, she felt "at a bit of a loose end."

So it was that, aged 88, she enrolled in a Diploma of Arts at Tabor Writing College.

It was following this that Beth had the idea to publish her life story: "We had writing exercises to do, and I had a lot to write about my life, and it just kind of grew from that," she says.

Beth continues to finalise her book from her room at Resthaven Malvern, which she moved into in late 2019.

She describes how she chose Resthaven because she "liked the atmosphere and the surroundings. I’m sure it’s one of the best ones around."

"The staff are lovely. They keep a very good standard of cleanliness and tidiness."

"I think they do a great job. I’m very happy here."