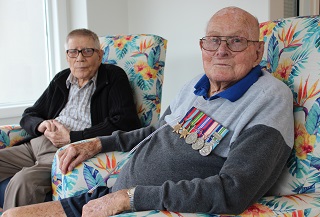 “The war was a cruel, nasty business. War is just tragedy.” When the world stops to remember those who have died in wars on Remembrance Day on November 11, the day will be especially poignant for two veterans from Brookfield.

Don Smith and Brian Beames both served in World War II – one on the ground and one at sea and on different sides of the world.

Now both 95 years old and living at the Carinity Brookfield Green aged care community, Don and Brian were teenagers when the second world war started.

Don served as a non-combatant engine fitter with the United Kingdom Royal Air Force, working on machinery including the Rolls-Royce Merlin engine dubbed “the engine that won World War II”.

The engine powered British bombers and speedy fighter planes which played key roles in several pivotal conflicts including in Germany’s defeat in the Battle of Britain.

While Don didn’t see active combat, he was severely impacted by war in his homeland of England.

“Living in the east end of London it was a very vulnerable place and the Germans smashed it up when they started the bombing. Forty-five percent of the houses were gone. That was the worst of the war for me,” Don recalls.

Brian spent four years as a Navigational Technician in the Royal Australian Navy on vessels like the HMAS Lithgow, which located German mines and took part in the destruction of Japanese minelaying submarines.

He served on the waters off Australia, Papua New Guinea and Japan, where he saw the devastating aftermath of the atomic bomb attack on Hiroshima.

“Serving in the war was just something that you had to do. There was nothing startling about it. You didn’t ask questions or query it, you just got in and did it. That’s what all military people did,” Brian explains.

“We were so lucky in Australia because we went so very close to flying the Japanese flag here.”

Brian and Don lost many friends during the war, who they will solemnly remember on November 11.

“A good mate of mine, we grew up together in Ipswich and he decided to join the Army. He got killed in the Solomon Islands,” Brian said.

Don says it’s “impossible to impart to younger generations what war is like.”

“You watch war on the films; it’s nothing like that. You’re thinking, ‘Is this my last moment?’, because you’re really frightened. You’ve never been so scared,” Don says.

“My brothers were injured and captured and we didn’t hear from them. We thought they were gone, dead, and you always had that on your mind. The parents and the families were always unhappy… thinking they weren’t going to see their loved ones again.”