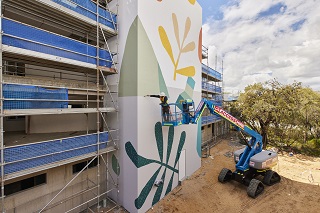 It was more than two years ago when Kyle first responded to the brief for large-scale artwork on the walls of two 18 metre high stairwells and a large two-storey curved entry wall, and his primary concept was a connection with local nature.

“I’ve referenced the colours of small coastal plants and rocks, but presenting it in a more modern way,” Kyle said.

“The front wall will be the hero work, and will be a lot more detailed. It will include images of vegetation, birds and fish. Some of the icons I’ve already painted on the stairwells will be used in a smaller scale on the entry wall so they will compliment eachother.

“I’ve really enjoyed working on this project as the brief wasn’t too prescriptive and left it open for my interpretation. It’s the way I most like to work,” he said.

Capecare CEO Elizabeth Hogarth said she was delighted with Kyle’s work and there were many positive reasons for including public art in the Dunsborough independent living and aged care facility.

“As an organisation committed to multigenerational engagement and inclusivity at our facilities, we felt that artwork being incorporated into the project offered an opportunity to lighten the spirit of people living at Capecare Dunsborough, as well as those entering and visiting,” she said.

“At Capecare we understand that human interactions are vital to the wellbeing of our clients and we want to encourage positive interactions and conversations. We see the work being created by Kyle as an opportunity to create conversation.

“It was important for us to give the artist creative scope, with an understanding of who we are and how the spaces at the Dunsborough site would be used.

“The main entry statement artwork will be seen from the outdoor green space between what will be the cafe and the new CWA headquarters. We hope it will evoke smiles for residents, families, visitors and our staff.”

The murals will also be seen from viewing points within the Capecare Dunsborough buildings, which was considered by Kyle when envisioning and designing these works. Kyle’s signature style is likely to be recognisable to West Australians, with murals visible from the Mitchell Freeway near Vincent Street exit, on the Merredin Wheat Silos, Perth Airport and Karratha Hospital.

Further afield his large-scale work can be appreciated from Newtown in Sydney to Washington DC, Cambodia and Iceland. He has held solo exhibitions in Perth, Melbourne, Madrid, Berlin, Vienna and Los Angeles and has written and illustrated three children’s books plus illustrated Meg McKinlay’s Ten Tiny Things.

Residents will be part of the community, in short walking distance to the beach, town centre, post office and country club. It is due to open in June 2021.

The project is made possible thanks to funding from the Australian Government’s Building Better Regions fund and State Government’s Regional Aged Care Accommodation Program.

Capecare has been established for more than 50 years and is a not-for-profit and independent community organisation, existing to serve the needs of people in the Capes Region.