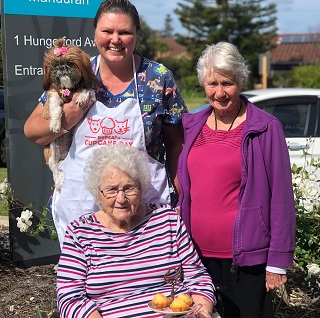 Residents at Mercy Place Mandurah will be fighting cruelty with cupcakes during October, as they take part in the sweetest fundraiser of the year - Cupcake Day for RSPCA.

The self-confessed animal lovers will be rolling up their sleeves to help bake, sell, share and eat dozens of cupcakes, in a bid to raise funds to help the thousands of sick, injured and neglected animals that RSPCA WA rescues each year.

Mercy Place Mandurah Service Manager, Christina Venables, says seniors at the home were dedicated animal lovers who, when they heard about about the fun fundraiser, wanted to join in to make a difference.

“When our residents heard about Cupcake Day, they jumped at the opportunity to combine a morning tea with helping to raise much-needed funds to help RSPCA WA rescue, rehabilitate and rehome thousands of animals each year," Ms Venables said.

“Even though animal cruelty is something we all want to avoid thinking about, the majority of our residents have owned animals in their younger years and so have been keen to help raise funds for all creatures great and small.

“Our residents also love baking and eating cupcakes, and by doing so we can raise money for the RSPCA is just the icing on the cake.”

Held nationally on Monday 26 October – but also with fundraisers throughout the entire month - Cupcake Day aims to raise vital funds for RSPCA WA, which relies on fundraising activities for over 90 per cent of its funding. More information can be found at: www.rspcacupcakeday.com.au