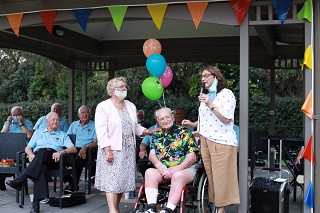 Friday the 13th was a lucky day for residents, staff, friends and family of Milton Alderson who celebrated 100 wonderful years.

‘The Festival of Milton’ kicked off at 10:30am at SummitCare Wallsend which has been Milton’s home for the last 10 years.

Due to current restrictions, a small group of family helped to celebrate with his old choir and two members of the RSL Sub-Branch.

The celebrations included a very special performance by Milton’s choir, the Waratah Warblers.

Singing has been a lifelong love for Milton who attributes his interest in music to a primary school teacher who transported his gramophone on his bicycle to school for the children to listen to music - Monday was the Horn on the handlebars and Tuesday was the rest - ready for singing on Wednesday and then he would take it all home again!

The key to Milton’s longevity lies in his activity!

When not participating in yoga, exercise classes or daily events he is busy keeping track of his large family.

General Manager, Robyn Blackwell said “While visits have been virtual and via ‘Windows of Love’ during COVID-19 restrictions, our birthday wish for Milton came true with restrictions being lifted and Milton being able to celebrate with family and a few friends!”

Milton is a decorated serviceman who had a medal commemorating the end of WW2 presented to him. In addition, the letter from the Queen was presented to Milton as well as messages of support from many others.

“Milton is a humble and witty gentleman who delights in making others laugh and telling tales of his life. He has endeared himself to every staff member at the home and we were excited to be able to celebrate this milestone with him” she added.

The festival of Milton continued on Sunday at a family gathering to honour a beloved father, grandfather and great-grandfather.