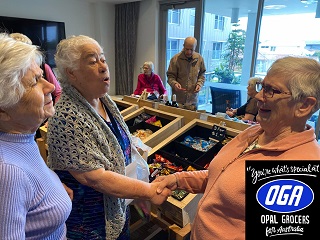 A simple idea has transformed the daily lives of residents at Opal’s Alfred Cove Care Community, where a resident-run supermarket, known as the OGA, has become a thriving hub for shopping and socialising.

The idea was born when the team at Alfred Cove Care Community were considering what it means for a resident to be “missing home”. What if it’s not necessarily their home that a resident misses but rather the lifestyle they once led? They recognised that while residents have many different interests, the one thing they are used to doing without exception is shopping!

Based on this hypothesis, Opal’s team got to work transforming the office into an employment agency and their very own mini IGA grocery store or “OGA” as they like to call it, came to life. To create a realistic environment, they started with a marketing plan. The team held a recruitment session, training day, product tastings, and created ‘checkbooks’ to spread the word about the OGA to Alfred Cove residents.

Alfred Cove General Manager, Natalia, says they opened the OGA when COVID happened. “Residents weren’t able to go out to the shops so we thought we’d bring the shops in. It’s still going strong and we have many residents who work in the shop which is pretty amazing because it gives them meaning.”

“They have a lanyard around their neck and they get a discount because they work there, so when they purchase anything, everyone wants to be their friend.”

The store sells items that are bought in bulk, mainly at Costco, so products can be offered at an affordable price and any requests for items can easily be sourced.

The domino effect has been profound, enabling various meaningful activities across both Alfred Cove Care Community and the neighbouring Melville Parkside Care Community.

The OGA has generated a number of volunteer opportunities for residents, including front desk, cashier management, and sales manager roles. Frank, a resident and sales manager, says now that he has a job, it gives him a reason to get up in the morning. The Opal team has observed Frank’s passion for his job and the spring that it puts in his step each day.

The OGA benefits residents with different levels of cognitive ability. For residents living in the Memory Care Neighbourhood, the methodical task of stock-taking supports memory care therapy. Handling money has residents thinking and processing more, promotes a sense of independence, and provides the opportunity to socialise with their “team mates.”

Janet owned her own business before moving to Alfred Cove. Now helping with reception or working behind the register during an OGA shift, she feels like she’s being useful again.

“It improves residents’ wellbeing from a mental and physical point and enables them to be part of the team,” says Natalia.

Residents who are cognitive may feel that people may look at them as if, because they’re old, there’s no future for them and they can’t do anything. But now they’re actually seeing that’s untrue. Our team is going to them, and our team is asking them questions ‘how much is that?’, ‘have you got change?’

“It challenges the stigma that people with cognitive impairment cannot do things as well as others. Being able to answer questions about price or the amount of change required makes our residents feel as capable as anyone else.”

It has also inspired residents’ creativity and now there is a production line between the Alfred Cove and Melville care communities. The art and craft group at Alfred Cove creates customised artisan paper bags for packaging, while Melville’s mosaic club makes and sells coasters, pot plants, and small tables through the store.

Residents who are ‘shoppers’ rather than ‘staff’ give feedback on the products they want to see available at the OGA. Natalia says “we’ve had requests for socks and makeup. We also have a gentleman who is a real health fanatic, he requested more healthy options in the store, so we made sure to do that as well.”

Another unique feature of the OGA is Maria’s Flower Workshop. Maria is resident talented in floristry who makes and sells gorgeous custom flower arrangements. This addition has been very popular and Maria’s business is booming!

The OGA has become a meeting place for residents across Alfred Cove care community. Now they have plans to expand! An outdoor café is in the works for residents to stop by for a coffee while they do their daily shop.

What began as a simple idea has changed the daily lives of residents for the better, reinvigorating a sense of purpose for resident volunteers and creating a true feeling of community and belonging.

Find out more about Opal Healthcare.