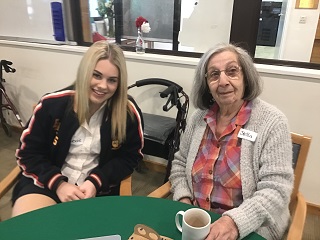 The art of letter-writing is alive and well thanks to students from Eastern Hills Senior High School, who have finally got to meet their pen-pals from Baptistcare Yallambee Residential Care in Mundaring.

“In those first letters the girls introduced themselves, including a photo and writing about their interests, hobbies and future endeavours,” Mrs Hawthorne said.

“One of the students is a dancer. Her pen-pal, Ted, talked in his letters about dancing and going to Saturday night dances back in the day.

“The girls have thoroughly enjoyed hearing the residents’ stories, about where they’re from and their families.”

The letter-writers have also been checking in to ask how their new friends are coping during the pandemic, and sharing concerns about family over east or overseas.

“The girls have gained a better understanding of not just aged care, but also of our older Australians and how they cope in a crisis,” Mrs Hawthorne said.

“Several of the girls have asked if they can keep writing even after they graduate later this year.”

When the pen-pals finally got to meet – six months after the first letters were sent – everyone enjoyed a joyful morning of tea, cake and lively conversation.

“The girls demonstrated interest, compassion, enthusiasm and dignity,” Mrs Hawthorne said. “As their teacher I was so proud to see these young ladies develop and enjoy great relationships with their pen-pals.”

The students prepared morning tea to take to Baptistcare Yallambee, personalising each box of tasty brownies and biscuits.

Leanne Ruggiero, Lifestyle Coordinator at Baptistcare Yallambee, said it was wonderful to see both generations so interested in each other’s lives.

“The residents especially looked forward to hearing about the girls’ planned futures and how they fill their days,” Mrs Ruggiero said.

“To feel part of the community is very important because that is the way we all live our lives. It is part of what helps us feel worthy.”

“Through the unnerving times of lockdown due to COVID-19 the students’ letters helped us stay connected,” she said.

“To finally be able to meet their pen-pals face-to-face was emotional at times, but so special and enjoyable for the residents.”

Pictured: Baptistcare Yallambee resident Stella Coxon with one of the letter-writing students