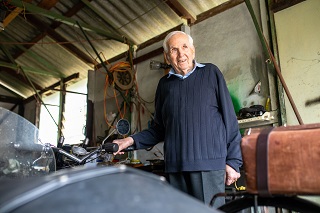 He may be a few months shy of his 100th birthday, but Ronald Morrison’s favourite place to be is still in his at-home workshop where he spends hours restoring vintage motorcycles.

It’s why living independently at home has been so important to the spry nonagenarian.

“The best thing for me about living at home is all my life’s here, including my workshop where I like to spend time,” said Mr Morrison, whose weeks are busy with walks, singing groups and restoring the vintage motorbikes that have been a life-long passion.

Mr Morrison relishes the time he spends in his workshop with his sons, who all share their father’s love of motorbikes old and new. Some of the bikes they have restored over the years are, like Mr Morrison, almost a century old.

Mr Morrison says it’s thanks to a helping hand around the house from Baptistcare Home Care that he’s able to continue to live in the Bayswater home he and his late wife Emma built in 1953.

“And if you’ve been blessed with the health, why not stay in your own home? There are other people with greater need than me. I’m not ready to take up a bed somewhere else yet,” Mr Morrison said.

Like many older Western Australians, Mr Morrison, who celebrates his 100th birthday this August 2021, takes advantage of a Government-funded tailored home care package through Baptistcare.

The not-for-profit care provider began lending the former air force engineer and his wife a hand around the house almost 20 years ago.

Mrs Morrison, who died in 2007, had been living with dementia for several years and Mr Morrison had looked after her at home for much of that time.

Originally from the UK, the couple, who were married for 64 years, met during World War II when they were both in the Royal Air Force (RAF).

They had been married less than a week when Mr Morrison was called up to fight. It was three years before they saw each other again.

Mr Morrison. “It all happens very smoothly. I only have to mention something and quickly Baptistcare is on the job.”