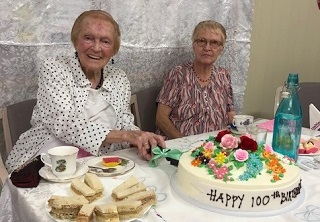 Teacups have been clinked to celebrate Doris Wood as one of the longest serving residents at Uniting Forest Village one her 100th Birthday.

Doris was born 6th March 1921 in Yorkshire, England to a working family. She met her husband Jack before the start of WWII and married in September 1939. Doris became pregnant with her first child during the war, prompting the couple to move away from the conflict to make a better life for themselves in Australia.

In 1948 they finalised their move to the Sydney suburb of Peakhurst, raising their children, Brenda and Anthony, until retiring up the coast.

Unfortunately, Jack fell ill and in 2001 they moved back to Peakhurst, in the retirement living of Uniting Forest village enjoying their lives and their grandchildren and great-grandchildren.

Sadly, Jack passed in 2006 but Doris continues to live at Uniting Forest Village where she is seen as the 'mother' of the group. Doris loves being the matriarch figure and wears the badge with pride and can tell you a bit about each and every person who has lived there for the last 20 years. In fact, she would say that's been her secret for a long, happy life.

"I have had a good, long happy life and I think there is something in those words. The key to living is being good to others and making sure that you put a smile on the face of everyone you meet"

Uniting provides retirement living for over 3000 residents in 85 villages. Almost 300 seniors live in Uniting social and affordable housing; part of Uniting's commitment to tackle homelessness and its root causes.